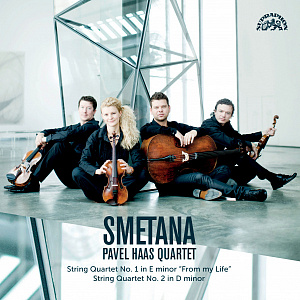 "The recording captures the quartet as if they were in your living room ... This is the kind of disc that makes record reviewing the best job in the world." Gramophone Awards. "These performances set a new standard and reveal so much of what makes these quartets unique." BBC Music Magazine. "This is extraordinarily bold playing - and they truly capture the sense that Smetana is writing symphonic quartet music." Gramophone
"In their native repertoire they are well nigh incomparable." The Sunday Times

When the most prominent critics across the board concur in the opinion that an album is extraordinary, it certainly deserves to be released on vinyl. Although Smetana's chamber pieces are few in number, each of them - personal, many a time harbouring a bold autobiographical statement - constitutes one of the cornerstones of Czech chamber music. Smetana wrote his two quartets in the twilight of his life, when he was afflicted by deafness. String Quartet No. 1, "From My Life", is a programme work: "My aim was to depict in tones the course of my life ... the piece is of an intimate nature; therefore I deliberately wrote it for 4 instruments, which should converse as though within a close circle of friends..." Owing to its being composed in an unconventional manner, String Quartet No. 2 comes across as a 20th-century work. The Pavel Haas Quartet's award-winning album has been released by Supraphon for vinyl fans and lovers of perfect sound on a top-quality LP (180g virgin vinyl, DMM cutting), supplemented by a Hi-Res digital version.

Smetana's intimate and timeless music, as performed by the Pavel Haas Quartet - for the first time on vinyl

“In the autobiographical No 1 what captivating lyrical ardour and devastating emotional candour these superlative young players display … a disc to treasure.”
Classical Ear, July 2015