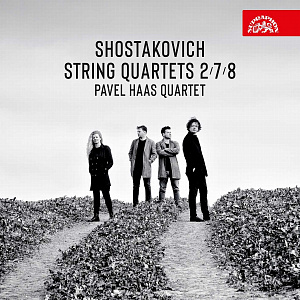 Shostakovich - his music is a challenge each and every quartet sooner or later has to face up to. Yet when it comes to the Pavel Haas Quartet, it seems to be in their very DNA. The ensemble's unbridled, impulsive and, now and then, frenetic energy, sense for extreme contrast, ability to bring to bear gradation from breath-taking subtlety and tenderness to symphonic drama are facets essentially incident to Shostakovich's music. Although composed in safety, away from the horrors of World War II, String Quartet No. 2 (1944) reflects the suffering, uncertainty and anxiety of living at the time (the lyrical Recitative of the second movement, as performed by Veronika Jarůšková, the first violin). Both dating from 1960, String Quartets Nos. 7 and 8 are truly intimate confessions. While Shostakovich dedicated the former (the shortest piece of the cycle) to the memory of his first wife, he most likely intended the latter as his own epitaph, at the time when be hovered on the thin line between life and death. Attesting to the autobiographical nature of String Quartet No. 8 is the opening DSCH motif, Shostakovich's musical signature, which reoccurs throughout the piece. The Pavel Haas Quartet surpass the abyss of time, as well as the barrier of personal physical existence, delving into the very centre of Shostakovich's music and reflecting the full scale of emotions with airiness, as if the music were their own.

The Pavel Haas Quartet and (in truth) their Shostakovich. At long last!

“What we have here is one of the bleakest and most beautiful recordings of the year, with all three quartets (particularly the much-recorded No. 8) approached with an immediacy that would make you swear that the ink was barely dry on the page.”
Presto Classical, November 2019

“The PHQ’s formidable combination of almost orchestral depth of tone with mercurial, chamber-music responsiveness lies at the heart of their success in the C minor Eighth Quartet. This is a performance of real weight and incisiveness which nevertheless finds plenty of room for the intensely personal nature of the music.”
Europadisc, October 2019

“The wonderful Pavel Haas Quartet perform three of Shostakovich’s he­re: the wartime No 2, a powerfully reflective response to the suffering and anxiety of the time, rigorously and sweepingly argued; the short No 7, written in memory of his first wife, its mix of sweet memories, turbulence and soulful lamentation affectionately captured; and the harrowing No 8, a paean to tragedy and anger, presented here as a crunching finale to this engrossing disc.”
The Scotsman*****, October 2019

“Its interpretation of the first and third movements are notable. In the former, the performers show the vibrant multi-dimensionality of emotions, ranging from the robust A-major opening to the menacing nature of the middle section. With so many character changes, a significant challenge for any group is to keep the energy flowing throughout. The ensemble does this impressively.”
The Classic Review, November 2019

“The Czech players are always worth hearing, especially in their angst-ridden account of the biographical C minor quartet (No 8), but also in the forlorn, if fleeting, F sharp minor (No 7), written in memory of his first wife. Their account of the Second Quartet, in A major, is spacious, intense and symphonically conceived.”
The Sunday Times, 24th November 2019

“It's their lightness of touch that commands; the subtle nuances of colour, line and texture performed with almost spectral intensity.”
BBC Music Magazine*****, Christmas issue 2019

“What really grips me about these performances is the ensemble's ability to get under the skin of the music and their compellingly imaginative concept of texture, instrumental balance and nuance.”
BBC Music Magazine, January 2020

“Supraphon presents them in vivid, reverberant sound that is a pleasure to listen to. Their playing is invigorating and always engaged, pulsing with life and emotion.”
American Record Guide, May 2020