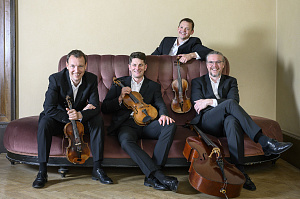 The Bennewitz Quartet is a top chamber music ensemble on an international scale, as is shown not only by their triumphs at two prestigious competitions – in Osaka in 2005 and the Prémio Paolo Borciani in Italy in 2008, but also by the critical acclaim they have received. The ensemble has also won many awards in its own country. In 2004, the Bennewitz Quartet was declared a laureate of the Czech Chamber Music Society of the Czech Philharmonic, and in 2019 the ensemble received the Classic Prague Award for the best chamber music performance of the year.

At present, the quartet is giving concerts on important stages in the Czech Republic and abroad (London’s Wigmore Hall, the Musikverein in Vienna, Berlin’s Konzer­thaus, the Théâtre des Champs-Elysées in Paris, the Frick Collection in New York, the Seoul Art Center, the Rudolfinum in Prague, and elsewhere), and it also appears at such festivals as the Salzburger Festspiele, the Luzerne Festival, the Rheingau Musik Festival, the Kammermusikfest Lockenhaus, the Dvořák Prague Festival and Prague Spring. The ensemble has engaged in artistic collaboration with such outstanding musicians as Alexander Melnikov, Vadim Gluzman, Jean-Yves Thibaudet, Krzysztof Chorzelski, Danjulo Ishizaka, and Pietro de Maria, among others.

The Bennewitz Quartet derives special enjoyment from its musical activities in its homeland. It greatly values its collaboration with the Czech Philharmonic and its former chief conductor Jiří Bělohlávek on a performance of the Concerto for String Quartet and Orchestra by Bohuslav Martinů or its encounter with the outstanding Czech clarinettist Ludmila Peterková, with whom the quartet recorded a CD for the Supraphon label.

Since 1998, the quartet has borne the name of the violinist Antonín Bennewitz (1833–1926), who was responsible for the emergence of the Czech school of violin playing. Among his pupils were Otakar Ševčík, František Ondříček, and members of the great Bohemian Quartet: Karel Hoffmann, Josef Suk, and Oskar Nedbal.