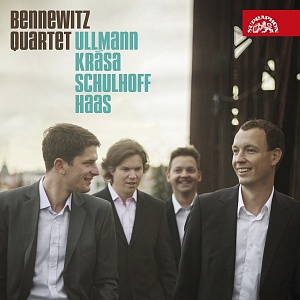 The composers whose music is featured on the present album lived and worked in Czechoslovakia between the two world wars, and their fates were afflicted by the monstrous Nazi regime. Viktor Ullmann, who before WWII held the post of Kapellmeister at the New German Theatre, wrote Quartet No. 3 while he was detained at the Theresienstadt ghetto-camp. Hans Krása completed the Theme and Variations in 1936, yet he only saw it performed in Theresienstadt, along with his children's opera Brundibár. Erwin Schulhoff's Five Pieces reveal his zest for rhythm and dance, as well as his evidently having been inspired by the music of the Viennese salons, Italy and Spain. Pavel Haas's Quartet No. 2, dating from 1925, serves as vivid proof of the claim that the composer was the most gifted pupil of Leoš Janáček. In October 1944, Haas, Ullmann and Krása were among the thousands of Theresienstadt prisoners transported to Auschwitz, where they would be murdered in the gas chambers.
The Bennewitz Quartet launched their international career following their victories at the prestigious competition in Osaka (2005) and the Prémio Paolo Borciani in Italy (2008). Ever since they have regularly performed at the world's most prominent venues (Wigmore Hall in London, Musikverein in Vienna, Konzerthaus in Berlin, Théâtre des Champs-Elysées in Paris, concert halls in New York, Seoul, etc.) and festivals (Salzburger Festspiele, Lucerne Festival, Rheingau Musik Festival, etc.). The music of the Theresienstadt composers has found in them splendid performers.


The music of the Theresienstadt composers, taken on by the Bennewitz Quartet: a truly congenial association

“Recording quality from Supraphon and documentation are all first-class, and as a musical tribute to a senselessly lost generation of Czech composers this can hardly be bettered. With top-quality playing throughout, even those with most of these works already in their collections will want to snap this disc up. They will find it endlessly rewarding.”
Europadisc, April 2019

“The Czech quartet demonstrate terrific rapport with one another and with the four composers who lived and worked in their homeland before perishing in Nazi concentration camps in the 1940s, throwing the music’s extremes of light and shade into stark relief – there’s bleak beauty in abundance, but the wit and audacity of the works (Haas’s whinnying horse, Schulhoff’s cod-tango and manic tarantella) are never short-changed either.”
Presto Classical, May 2019

“These well-recorded readings, like the booklet notes, are full of spirit and breathless excitement, as well as not a little instrumental finesse.”
MusicWeb International, May 2019

“The Bennewitz Quartet, who I had not heard perform before, are a wonderfully balanced ensemble with superb intonation and internal harmony. Their accounts of all of these works are exemplary and they need fear no comparison with any of their rivals. Wonderfully warm and natural sound from Supraphon, too. A splendid disc.”
Gramophone, July 2019