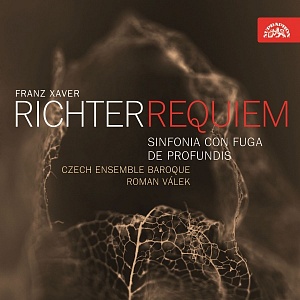 Spotify
Catalogue Number: SU 4177-2
Published: 13th February 2015
Genre: Vocal - Religious
Format: 1 CD
"… he sat down in an armchair, pored over for the last time the score of the mourning music he himself had composed for his funeral, and - when lightly touched by the angel of death - bowed his head and passed away." C. F. Schubart's description of the death in 1789 of the eighty-year-old F. X. Richter, Kapellmeister of the Cathédrale Notre-Dame in Strasbourg, may be rather romantic (two years later an almost identical story related to the last moments of W. A. Mozart), yet when looking at the clean copy of the autograph score we cannot resist the idea that the Requiem encapsulates the quintessence of his legacy. A truly extraordinary figure, standing out among the plethora of Czech composers based abroad, Richter's singular musical phraseology reflects the places where he studied and worked: contrapuntal mastery (a pupil of J. J. Fux in Vienna), elements of Neapolitan opera, the Mannheim school… He had a reputation as a guardian of the traditions of the "genuine church style" at the time when the pre-Classicist galant style was taking hold. How striking a similarity with the "Dresden" Zelenka! Perhaps this is one of the reasons why Richter's music, his grand vocal works in particular, is still awaiting discovery. The two mourning pieces were written in Strasbourg, where Richter lived from 1769, the sacred Sinfonia con fuga came to light in Mannheim. The distinguished Czech Ensemble Baroque are among those who are today undertaking to mediate Richter's remarkable oeuvre.

The Requiem composed by Richter for his own journey to eternity - premiere recording.

“The performances by all-Czech period forces are competent, well-shaped and stylish. If you are interested in the music, you'll be content with them. The church acoustic takes away much chance of making the music bite but helps create an imposing, dignified yet unclogged sound.“
Gramophone, May 2015