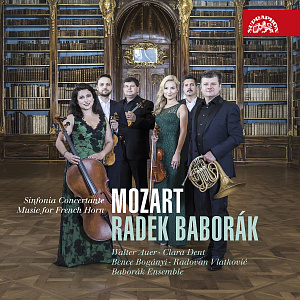 Warning: this recording is not intended for musicological purists. But if you love spontaneous music making in the most select of company, this is definitely the right recording for you. Radek Baborák, for example, does not hesitate to arrange a discarded movement from a symphony to add as the missing movements of an unfinished horn concerto. Of course, to tell the truth, didn't Mozart himself do the exact same thing countless times? In this way, the preserved fragments are turned into two "new horn concertos". The Sinfonia concertante for four wind instruments and orchestra, K 297b is a work surrounded by many mysteries, and it fits beautifully in this context of discovery. Here, it is recorded in Baborák's arrangement for Mozart's original instrumentation. Playing the solo parts are virtuosos from Europe's best orchestras. For the 12 horn duets - the only completely extant composition on this album played in its original instrumentation - Baborák's partner is another of today's legendary horn players, Radovan Vlatković. Radek Baborák and his friends are inviting you on an excursion to the world of their elder colleague Wolfgang Amadeus - with his inexhaustible supply of jokes, ideas, and colours.

“An enchanting set, then; I’ve met several musicians who’ve argued that Baborák is the greatest living horn player. These performances ooze character, channelling Mozart’s cheekiness and his profundity. Good notes too, including an enjoyable interview with Baborák. Volume 3 is hopefully on the way.”
The Arts Desk, February 2019

“The playing from both soloists and orchestra is infused with the kind of drive, spirit, bloom, alertness, boldness – call it what you will – that commands undivided attention from beginning to end… Everyone is on the same wavelength, phrases are lovingly and identically shaped, balance is perfect, and some of the virtuosic licks they toss off in the finale will make your hair stand on end… This is an essential release for all horn players and all Mozart aficionados.”
Fanfare, April 2019