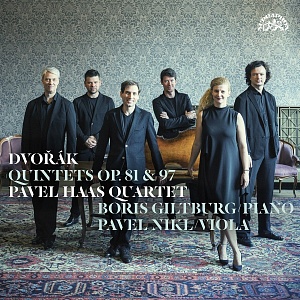 Seven years after their triumph with quartets by Dvořák (SU4038-2, Op. 96 "American" and Op. 106 - 2011 Gramophone Award for "Recording of the Year), the Pavel Haas Quartet are making a triumphant return to Dvořák's music. For the recording of the quintets, they have invited two guests: the pianist Boris Giltburg (winner of the 2013 Queen Elisabeth Competition) and Pavel Nikl, a founding member of the Pavel Haas Quartet. Dvořák composed his Second Piano Quintet at his beloved summer residence Vysoká late in the summer of 1887. The famed critic Eduard Hanslick received the work's performance in Vienna enthusiastically: "It is one of his most beautiful works. It is real Dvořák." The String Quintet, Op. 97, although younger by just six years, represents an entirely "different Dvořák". After the New World Symphony and the American Quartet, it is Dvořák's third work composed while in North America. And what did Hanslick have to say this time? "It is perhaps the simplest, most natural, and happiest music composed since the days of Haydn." The degree to which the Pavel Haas Quartet feels at home with Dvořák's music is shown by the many awards their recordings have received (Diapason d'Or, BBC Music Magazine Recording of the Month), crowned by the ensemble's sixth (!) Gramophone Award. Now there will also be something for fans of vinyl sound: 180 g virgin vinyl, DMM cutting... What more is there to say?

“The reactive tension on which this quartet's repu­tation for seductive performances lies can sometimes tire and grate, but here it delivers musical experiences nothing short of compelling… There is little sense of leaning back in dreamy repose here, even in the passages that might suggest that feeling… Nervous tension prevails, and in this instance, with involving sound, it enthrals.”
The Strad, January 2018

“The opening movement is so powerful that the ensuing Dumka sounds hushed by comparison, though the gradual build-up toward the final two movements is handled perfectly… When it comes to Dvorak’s String Quintet, however, I immediately knew that this was a special performance. Joined by violist Pavel Nikl, the Haas Quartet plays this with even more brio, but their vision of the piece prevents it from seeming raucous or out of control. Both the Allegro vivo and the Larghetto are proportionately measured, refined, even sweet in tone.”
American Record Guide, February 2018