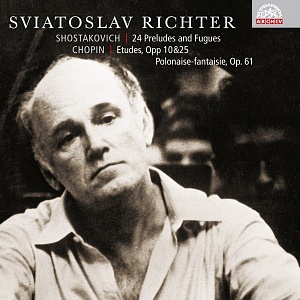 Spotify
Catalogue Number: SU 3796-2
Published: 18th January 2008
Genre: Chamber Music
Format: 1 CD
The second CD of Richter's Prague recordings also contains hitherto unreleased recordings, a selection from two series of Chopin's Etudes (Op. 10 and Op. 25), together with Polonaise-Fantaisie, Op. 61. It is a live recording from a concert at Prague's Rudolfinum in February 1960. In his Etudes, Chopin combines the highest and most diverse technical requirements with a weighty musical content. Richter is among those paramount interpreters whose bravado technical performance of a work is crowned with ingenious musicality.
Shostakovich completed the cycle 24 Preludes and Fugues, Op. 87, intended as a modern-day counterpart to Bach's The Well Tempered Piano, in 1951. The Preludes and Fugues are the composer's - and in this recording also the interpreter'pos - creative celebration of the inexhaustible source of primary invention. We should point out that the presented recording of a selection from the cycle originated only five years after Shostakovich had finished the work.