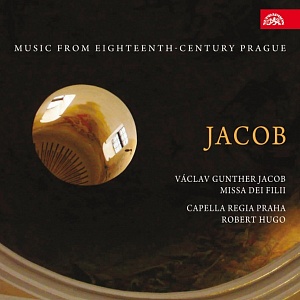 Spotify
Catalogue Number: SU 3971-2
Published: 26th June 2009
Genre: Vocal - Religious
Format: 1 CD
This album has received following awards:
Throughout the 18th century, Prague was a significant European centre. When it comes to music, it fused in a singular manner influences primarily from Dresden, Vienna and Italy with the famous Czech musicality and folk culture. In a superlative and historically knowledgeable interpretation, the newly originating cycle "Music from Eighteen-Century Prague" will map the-yet-to-be-appreciatedwealth which is still being discovered in Prague, Czech and foreign archives and which directly reflects the variegated picture of the musical life of the capital. Václav Gunther Jacob's "Missa Dei Filii", which in world premiere opens this series, is an example of the creation of one of the most popular composers from the Czech lands in the first third of the 18th century. Jacob was primarily synonymous with the Benedictine Monastery of Saint Nicholas in Prague's Old Town, yet thanks to several printed music collections his fame spread far beyond the country's borders (prints have been preserved in, for example, Munich and Bologna) and earned him a number of commissions from abroad. Through this CD, the remarkable work of the stylisticallyhighly original composer has for the first time in centuries the opportunity to draw the attention it deserves and be listened to by lovers of Baroque music. The recording is noteworthy for its vivacity and stylistic purity - attributes characteristic of Capella Regia Praha.