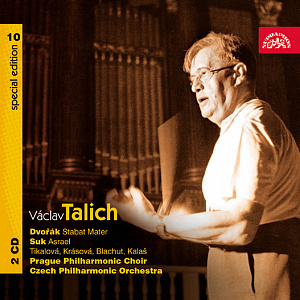 Spotify
Catalogue Number: SU 3830-2
Published: 23rd June 2006
Genre: Vocal - Religious
Format: 2 CD
This album has received following awards:
Two Introspective Testimonies of Pain and of Overcoming Pain.
Stabat Mater-a sacred cantata born of the sudden death of three of Dvořák's children.
Asrael-a vast funereal symphony written by Suk in mourning for his teacher and father in law Dvořák and for his wife, Dvořák's daughter Otylie.
"It was truly necessary to experience life and to know human misery, so that I could bow before the Stabat." (Václav Talich)
Václav Talich Speaks-bonus. A unique recording of Talich's speech to the orchestra during the recording of Suk's Asrael on the day of theconductor's 69th birthday.

“Still the benchmark recording, it represents an aesthetic untenable in an era that sought immediacy and impact over lucidity and poise, with playing of similarly ‚old world‘ elegance and refinement.”
Gramophone, June 2018