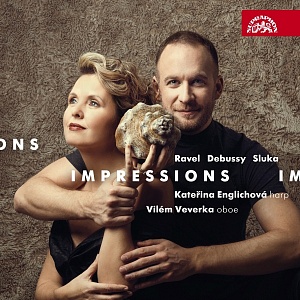 
On their previous Supraphon recordings (SU 4185 - Musica per arpa, SU 4188 - Vivaldi, Telemann, Bach, SU 4121 - Telemann, Britten ad.), harpist Kateřina Englichová and oboist Vilém Veverka sufficiently proved their outstanding performance qualities as well as informed interest in such mutually remote music worlds as the Baroque and the 20th century modernism. The present recording - their first made in dues - reflects more than twelve years of their performing together in concerts. The not-so-common combination of oboe and harp provides an endless scale of timbres and the resulting impression is marked both by frailness and confident virtuosity. Ravel's Le Tombeau de Couperin is the crucial piece on the album and represents the composer's memories of his friends lost in the First World War. Little musical gems written by Ravel and Debussy resound here in sensitive arrangements which have enriched the compositions by new timbre qualities. Primavera composed by Luboš Sluka was composed explicitly for the Englichová - Veverka duo and appears here in premiere recording.

“The playing is exceptional – there is strong evidence is of interpretative sympathy between the two instrumentalists. The recording quality is very clear and uncluttered.”
MusicWeb International, August 2017