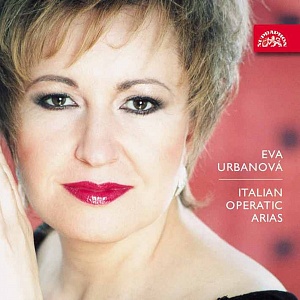 iTunes
Spotify
Deezer
Catalogue Number: SU 3763-2
Published: 20th October 2003
Genre: Opera
Format: 1 CD
Where else than in Italy should one seek for a repertoire offering countless brilliant opportunities for the most spectacular display of a grand voice and of immaculate soloist vocal technique? And where else than in the work of Veristic composers are these qualities wed to masterly dramatic feeling? Who else besides the Verists, moreover, is nearly as capable to keep their audiencesin a state of suspense, by the use of, among other devices, even such harmonic means as for instance sequences of chords of the seventh, augmented triads, and a wide variety of parallellisms? Now this treasure-laden soil so immensely rewarding for artists and audiences alike, was claimed for tilling by the Czech Republic's current Number One soprano, Eva Urbanová. She did so as part of her appearance at the 2003 edition of the Prague Spring international music festival, in a concert where her partners were some of the most competent forces then in town, including notably Slovak opera leading man Ondrej Lenárd. On that night Miss Urbanová's pliant yet at the same time sonorous voice met the highest expectations, and made Supraphon proud of enjoying the privilege of presenting her live festival performance to the broadest circle of audience.
Eva Urbanová's bet on Verismo arias yields triumph!