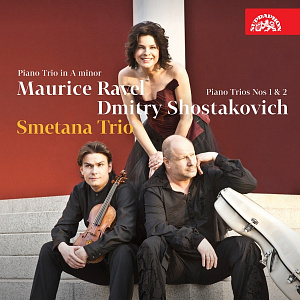 A recording of thrilling extremes

„The Smetana Trio revels in the extremes of dynamics, texture and mood that characterises Shostakovich's sco­re, yet achieves the greatest emotional intensity without recourse to idiosyncratic
interpretative mannerisms. What is particularly striking about this performance is its comprehensive mastery of the music's archi­tecture, a good example being the subtle way the players build up tension in the slow tread of the Passacaglia while at the same time maintaining a deliberately subdued colour throughout. This strategy pays particular dividends in the long-term connection between the slow movement and the finale, thereby making the outburst of anger that engulfs the climax near the end of the work and the ensuing collapse into near exhaustion in the coda all the more shattering.
Perhaps the most impressive aspect of all comes earlier on. At the opening, for example, violinist Jiří Vodička follows cellist Jan Páleníček's glassy harmonics by imbuing his lamenting theme with a distinctive sobbing vibrato that sets the mournful tone for the rest of the movement. Once the music gathers momentum, the Smetana Trio is adept at negotiating the intensification of the musical argument, avoiding awkward gear changes every time the music's emotional temperature rises.“