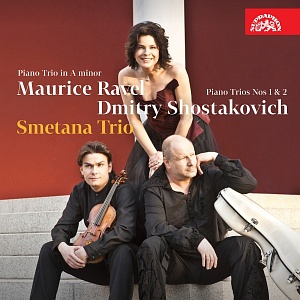 Following their recording of the complete Brahms trios, the renowned Smetana Trio have turned their attention to 20th-century music. Although the French Impressionist Maurice Ravel wrote very few chamber works, some of them are true gems. His one and only piano trio, which he completed in haste before leaving for the front in WWI, is one of the most beautiful pieces written in the past century for this configuration. The motivic material reflects Ravel's Basque origins and partially draws upon the piano concerto he was working on at the time. Dmitry Shostakovich's Trio in E minor, a piece replete with invention and emotional contrasts, is also one of the most splendid musical gems and testimonies to the century in which it was created. In many respects, the weightiness of the culmination of WWII contrasts with the mood of Shostakovich's little-known first trio, a one-movement, surprisingly mature work of a seventeen-year-old composer. The internationally acclaimed Czech ensemble performs the three splendid chamber pieces in a rounded and inspiring manner.

The complete Ravel and Shostakovich piano trios on a new recording made by the award-winning Smetana Trio.

“Shostakovich's war­time Second Trio, such a powerful work, gets a splendid performance…the Smetana players know just what to do for maximum effect…the Smetana Trio respond most beautifully to Ravel's more sensuous passages and give us a real sense of the work's breadth and emotional range.“
Gramophone, August 2014

“The Smetana's per­formance of the Ravel is not coolly ‚Classical‘, but fully alive to its poignancy and inventive colouring. Pianist Jitka Cechova starts a touch slower than Ravel's metronome marking, yet she and her colleagues observe Ravel's relative tempos scrupulously, and the music – given time to breathe- becomes unusually expressive.“
BBC Music Magazine, July 2014

“This [First Shostakovich] Trio can sometimes seem rather a rambling piece, but such is the conviction and intensity of this new Smetana Trio performance here that any doubts are swept aside, and the ardent sincerity of the music shines throughout…this is a disc that triumphantly confirms the pre-eminence of this marvellous Czech ensemble, and I recommend it very warmly.“
International Record review, May 2014