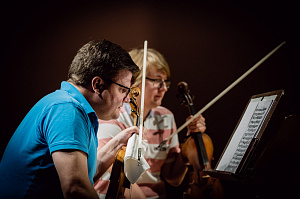 VÁCLAV DVOŘÁK FROM THE DOLEŽAL QUARTET

On 9 October, Supraphon released the new album by Doležal Quartet and the oboist Michaela Hrabánková featuring a world premiere recording of Josef Mysliveček’s oboe quintets and string quartets. We talked with the violinist Václav Dvořák about this new release.

Is your new album your first collaboration with the Supraphon label?
The Doležal Quartet had previously worked with Supraphon on a Jan Bartoš album. We made with the pianist a live recording of Concerto for Piano and Orchestra No. 12 in A major, „A Quattro“, KV 414/386a, which is included in his Mozart project. In the second part of the CD, Jan Bartoš is accompanied by the Czech Philharmonic conducted by Jiří Bělohlávek.

The Josef Mysliveček works on your new album are world premiere recordings. How did you rediscover the pieces?
The album’s genesis started five years ago, when we got together with the oboist Michaela Hrabánková to discuss the repertoire we could perform. When it comes to Mysliveček’s qu­intets, everyone knew that he composed them, but no one knew where the scores were. Consequently, we began an intensive quest, with the result being the rediscovery of three of the six quintets. First we found a set without the oboe part, and later on we located in private collections a copy of the complete score.

What do you play the rediscovered works from? Have the scores been published?
I myself have transcribed the music. While doing so, I compared two versions, written by different copyists. I strove for the outcome to be as authentic as possible. Within two years, we would like to have the scores published, to make them available to other musicians.

Your new album also contains Mysliveček’s string quartets, which too you have recorded in world premiere. How did you select the particular pieces?
Mysliveček created over 20 string quartets. After we had played all of them, we whittled it down, and ultimately recorded the three we deemed most inspired – two early quartets and one dating from the composer’s late period, published posthumously. We drew upon the edition of the American musicologist Daniel E. Freeman, who highly valued the final version of all the three quintets and who also wrote the text for our CD booklet.

Josef Mysliveček spent decades in Italy. Is his music evidently influenced by the southern milieu?
I think that Italy was an excellent choice. Mysliveček had an immense sense for melody, hence it comes as no surprise that he was so esteemed and popular in that country. Judging by that which I have read in his monographs, he was the type of person who would have fitted right in.

How did you approach interpretation of Mysliveček’s mu­sic?
I admit it was a tough nut to crack. It took us a long time to arrive at the optimal interpretation. Following several rehearsals and discussions, Michaela Hrabánková finally decided to play the modern oboe, yet we too had to accommodate to a certain degree. Striving to achieve an authentic performance, we consulted early music experts about everything. We also tried out a variety of strings, as during Mysliveček’s time these instruments experienced a major development. In the end, when recording we held the bows in the Baroque manner in order to attain a softer sound.

You made the recording at the Dvořák Hall of the Rudolfinum. Was it indeed an ideal environment?
We wanted to pay tribute to Mysliveček by making the recording at the Rudolfinum, one of the most prestigious concert venues in the Czech Republic. His music certainly deserves it. Moreover, we were again happy to have worked with Jabub Hadraba, a fabulous music director and sound engineer rolled into one.

Can we look forward to concert performances of the Mysliveček pieces featured on the new album?
Yes, one of our programmes is solely made up of Josef Mysliveček’s works. We would like to have his music presented to as wide an audience possible. We have also drawn up an educative programme entirely focused on Mysliveček. We are delighted that promoters are interested in such projects, and we would like to continue to pursue this exclusively Mysliveček path for another year or two.

Does your ensemble have a “core” repertoire?
I wouldn’t say it concerns music from the Classicism era. We have a great penchant for Romanticism and Impressionism, and we really love Leoš Janáček. We also have a close affinity to contemporary music. Several composers have turned to us, suggesting collaboration.

What concerts are you scheduled to give soon and which do you look forward to the most?
Due to the pandemic, several concerts of ours have been cancelled, which we are truly sorry about. We are currently planning a tour of Slovakia. We should soon give a large concert of wonderful music in Brno. I really look forward to it, as I was born in the city and haven’t performed there for almost two decades. Furthermore, we have prepared several concert programmes in collaboration with the actress Valérie Zawadská.

Have you given thought to your next album?
We are preparing a large-scale project to mark the Doležal Quartet’s 50th anniversary, but I’d rather not disclose any details for the time being. And maybe before that we will make a recording with the clarinettist Anna Paulová.