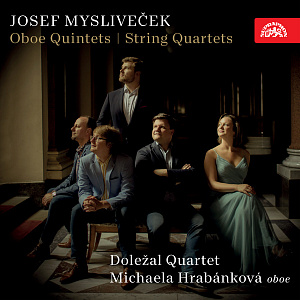 On 9 October 2020, Supraphon will release a new album by Doležal Quartet and the oboist Michaela Hrabánková featuring a world premiere recording of Josef Mysliveček’s oboe quintets and string quartets. The album will be released on CD and in electronic formats.

Josef Mysliveček, best known for his operas, has most frequently been mentioned in connection with W. A. Mozart (who, for a certain time, viewed him as a model and inspiration). At the age of 26, he left Prague for Italy, where four years later, in Naples, he celebrated his first triumph, with the opera Il Bellerofonte (1767). A prolific and gifted composer, Mysliveček also wrote instrumental music, including symphonies and chamber pieces. His first cycle of string quartets was published in Paris in 1768, the final one in Amsterdam, shortly after his death. These works were often performed in extended formations as symphonies. Mysliveček’s qu­artets are characterised by engrossing, refined slow middle movements. Even more unique are his oboe quintets. For a long time, they were only known owing to Leopold Mozart’s reference to them in a letter to his son Wolfgang, dated October 1777 – Mysliveček wanted Leopold to offer his quintets and other pieces to the Archbishop of Salzburg.

Only due to the initiative of the Doležal Quartet, primarily the oboist Michaela Hrabánková and the first violinist Václav Dvořák, have the missing oboe parts for three of the six Mysliveček quintets been retrieved in private collections across Europe. The CD thus contains world premiere recordings of rediscovered Mysliveček works, whose significance is further enhanced by a stylistically sensitive interpretation. Our picture of „Il Boemo“, whom the renowned music historian Charles Burney ranked alongside such masters as Hasse, Gluck and Haydn, is now more complete.

We asked Václav Dvořák, first violin of the Doležal Quartet, about the genesis of the album featuring Josef Mysliveček’s oboe quintets and string quartets.

You have succeeded in rediscovering the missing oboe parts for three of the six Mysliveček quintets. What lengths did you have to go to?
The new album has rounded off endeavours that lasted five years… All the parts were considered lost. Only during the course of the research did we find out that the set lacked the oboe scores. So we plunged into combing through sources, wrote numerous emails and made several trips. It was really thrilling. Just imagine you fly somewhere after a collector has written to you he has the music, but when you arrive he says that he might have been mistaken. You rake over the whole library, and that which you seek is the very last sheet there is! Ultimately, we had two different sets of music – one without the oboe parts, the other complete. Yet the real sleuth work was comparison of the two versions when I was transcribing the scores.

Did you enjoy making the premiere recordings of the rediscoveries?
Yes, absolutely, it was a great joy! During the album’s prepa­rations we realised that the quartets too would be recorded for the very first time. First and foremost, we had to agree on how to approach the performance. Michaela also plays the Baroque oboe, which, however, cannot be tuned to today’s standards. Moreover, we tried out Baroque and Classical strings, which experienced a great boom in their development during Mysliveček’s time. We ultimately agreed on blending contemporary and historically informed performance. Recording music that no one has heard for 250 years requires building the performance from scratch. It was a great challenge that entailed enormous responsibility. When there is no benchmark, you realise just how much you are influenced by other recordings.

Will you include the pieces featured on the album in your concert programmes?
We have a programme made up entirely of Mysliveček’s music, as we would like to make it more generally known. The majority of the pieces featured on the album last about 10 minutes, so they are ideal for opening any concert. The string quartet repertoire has sometimes been repeated, and we, as a Czech ensemble, are afforded the chance, and feel obliged, to showcase what excellent composers we have had!

Yet our plans have been affected by the current COVID-19 pandemic. A number of our concerts have been cancelled, including those within which we were scheduled to perform works from the new album, and thus have been deprived of the opportunity to present to audiences the „previously unheard“ Mysliveček music.