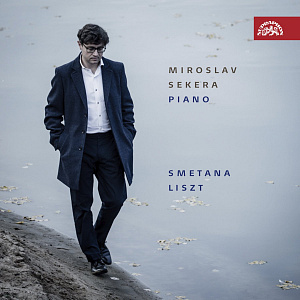 The pianist Miroslav Sekera has recorded for Supraphon an album made up of works by Franz Liszt and Bedřich Smetana. The album will be released on 22 May 2020 on CD, as well as in digital formats (MP3, FLAC, Hi-Res).

„Two reasons led me to make the album. When it comes to Liszt, I primarily aimed to highlight the musicality and poetics of his pieces, not to showcase the pianist’s technical dexterity. And Bedřich Smetana’s works attest to his being a singular figure of Czech Romanticism. Even though, compared to Franz Liszt’s piano pieces, they are not overly known, many of them are true 19th-century gems. I would like to prove that Bedřich Smetana was a composer comparable with Franz Liszt and that his music deserves to be performed at major concert venues worldwide,“ Miroslav Sekera pointed out.

Putting together Smetana and Liszt is not surprising – both of them were superb pianists, with the piano having played a significant role in their lives and artistic developments, particularly in the first decades of their careers. Liszt was a great model for Smetana, as documented by a note in the Czech composer’s diary: „With God’s grace and help, one day I will be like Liszt in technique and like Mozart in composition.“ The correspondence and several personal encounters between Liszt and Smetana ultimately led to a friendship. Yet whereas Liszt’s piano works have enjoyed great attention, Smetana’s piano music is yet to become widely known and acknowledged. The very first cycle of characteristic pieces, Bagatelles et Impromptus (1844), written by Smetana at the age of 20, featured traits that would be palpable throughout his piano oeuvre. His five-year stay in Gothenburg and conversations with Liszt enhanced Smetana’s penchant for programme music. This inclination of his reflected in several virtuoso piano works dating from that time, including the piano poem Macbeth and the etude On the Seashore. Sekera’s perfor­mance reveals to the full Smetana’s genius and singularity, which we know from his symphonic poems, but are only now discovering in his piano music.

Miroslav Sekera is an extraordinary soloist, as well as an experienced and sought-after chamber musician (regularly performing with the violinist Josef Špaček, the hornist Radek Baborák, and others). He has played the piano since the tender age of three, when his exceptional talent was discovered by Zdena Janžurová, an outstanding music educator. During his childhood, he also took violin lessons. Owing to his mastering the two instruments, Miroslav was cast in the role of little Mozart in Miloš Forman’s Oscar-winning film Amadeus. Upon enrolling at the Prague Conservatory, he decided to focus solely on the piano. He attended the classes of Eva Boguniová, as well as Martin Ballýh. After graduating from the conservatory, he studied at the Academy of Performing Arts in Prague, under the guidance of Miroslav Langer. In 1999, he completed his training as top of the class. In 2006, Miroslav Sekera made a solo CD featuring music by Johannes Brahms and Domenico Scarlatti, which was released with the support of the Czech Music Fund. Moreover, Albany Records and Navona Records have released his three albums featuring works by the contemporary Boston-based composer Joseph Summer. In 2013, he and the violinist Josef Špaček made a CD for Supraphon. Miroslav Sekera has regularly collaborated with Czech Radio. He has garnered a number of accolades, with the most noteworthy being first prize at the 2002 International Johannes Brahms Competition in Portschach. The other Czech and international awards he has received include prizes at the Fryderik Chopin Competition in Mariánské Lázně, the competition held by the Academy of Performing Arts in Prague (the YAMAHA scholarship) and the International Piano Competition in Gaillard.