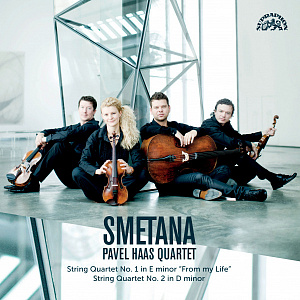 FOR THE FIRST TIME ON VINYL

On 25th October, SUPRAPHON will issue a vinyl recording of the critically acclaimed 2015 CD of Bedřich Smetana’s String Quartets (Gramophone Award, BBC Music Magazine Award, and other accolades), as performed by the Pavel Haas Quartet.

When the most prominent critics across the board concur in the opinion that an album is extraordinary, it certainly deserves to be released on vinyl. Although Smetana's chamber pieces are few in number, each of them – personal, many a time harbouring a bold autobiographical statement – constitutes one of the cornerstones of Czech chamber music. Smetana wrote his two quartets in the twilight of his life, when he was afflicted by deafness. Owing to its being composed in an unconventional manner, String Quartet No. 2 comes across as a 20th-century work.

The lovers of vinyl and perfect sound can look forward to a top-quality LP (180g virgin vinyl, DMM cutting), which will be supplemented by a digital version in Hi-Res.