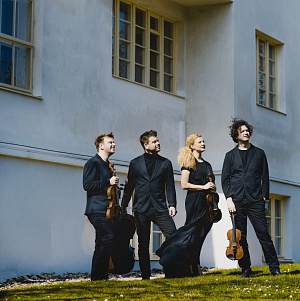 PAVEL HAAS QUARTET ABOUT THEIR SHOSTAKOVICH

What was the impulse for your recording Shostakovich’s qu­artets? Are his quartets part of the staple repertoire worldwide?
Peter Jarůšek: Shostakovich’s qu­artets are among the repertoire staples in this genre. He was a composer of global calibre, who transcended the borders of his own country from the very beginning.
Marek Zwiebel: We deem Shostakovich to be a seminal 20th-century composer whose music boldly expressed human nature, conveying a significant message.

When scrutinising several Shostakovich symphonies, many compelling, often weighty, stories formed their background. What stories are concealed in his quartets?
Marek Zwiebel: Shostakovich began writing quartets later than symphonies. He dedicated his symphonies to the whole Russian people, which is quite evident from the music. I am of the opinion that the Russian nation identified themselves with his works. On the other hand, the quartets were his intimate personal “diary”.
Veronika Jarůšková: Perhaps that is why when playing Shostakovich’s qu­artets we feel very close to him as a composer and human being, as though we were engaged in a conversation.

Why did you choose quartets 2, 7 and 8 in particular?
Veronika Jarůšková: I was the first from our ensemble to play the seventh quartet – at master classes with Valentin Berlinsky, the cellist of the Borodin Quartet, who studied the piece with Shostakovich himself. The eighth quartet is like a memorial to Shostakovich, an iconic work that has accompanied us since the formation of our ensemble. The second quartet is a monumental piece, a “quartet symphony”, whose second part I personally perceive as being a prayer for the entire humankind, with the final “amen”.
Marek Zwiebel: The quartets nicely supplement each other. We should bear in mind that they starkly differ. The seventh and eighth were written in the 1960s, the second was composed in the 1940s, during the second world war.

Which other composers have you combined with Shostakovich at concerts?
Peter Jarůšek: With regard to the forcibility of the message and distinct musical idiom, we have always had to give it a lot of thought. When it comes to Shostakovich’s se­cond quartet, we have come to the conclusion that it must be performed in the second half of concerts – what is more, we agreed that it is not appropriate to add anything, as everything has been said, and it would seem that the audience feel the same.

What style of recording do you like? How do you work when recording?
Peter Jarůšek: First and foremost, I would like to say that we fully rely on our now established and faithful recording team, made up of the recording director Jiří Gemrot and the sound engineer Karel Soukeník. In a way, we are actually “in their hands”.

Will you be playing the works featured on your new album at concerts in the foreseeable future?
Veronika Jarůšková: The majority of our concerts contained these Shostakovich works prior to our embarking upon the recording – accordingly, this phase is behind us. In a certain sense, we have come to an end of a period in our history. Even though we will perform Shostakovich’s qu­artets at a few concerts, we will, as is usually the case, rather focus on a new repertoire, instead of looking back.

Could you reveal the repertoire you have pursued in the current season?
Marek Zwiebel: Since the previous season, we have been intensely exploring the complete quartets of Bohuslav Martinů, whose works we will perform next season at Wigmore Hall in London. Furthermore, we have concentrated on Bartók, Beethoven and Tchaikovsky. And we really look forward to working again with the violist Pavel Nikl and the cellist Danjulo Ishizaka.

What countries and cities will you visit over the next few months?
Peter Jarůšek: We launched our season in Zurich, and we are scheduled to visit the Benelux countries, London and Stockholm. We will also make our debut in Israel, where we will give three concerts. Our next destination will be Poland, and we will also perform in the Czech Republic – at the Janáček Brno festival and within the Bohuslav Martinů Institute Benefit Concert in Prague. Before the year is out, we will travel to Rome and Milan.

Could you say what type of album would you like to record next with Supraphon?
Peter Jarůšek: We would like to link up to our recent CD of Dvořák’s quintets we made with Boris Giltburg and Pavel Nikl. Our intention is to get together with them again and record Johannes Brahms’s quintets.