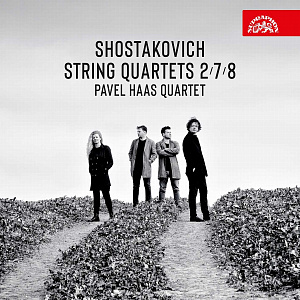 String Quartets Nos. 2, 7 and 8 have been part of the ensemble’s staple concert repertoire, yet only this spring did the PHQ arrive at the conclusion that the time was ripe to record the pieces. The violinist Veronika Jarůšková pointed out: “Shostakovich is one of the cornerstones of the quartet repertoire, and we have always felt a close personal connection.” The violinist Marek Zwiebel added: “The quartet cycle is actually his autobiography, his personal confession, something like a spiritual cross-section of his entire life.”

Although composed in safety, away from the horrors of World War II, String Quartet No. 2 (1944) reflects the suffering, uncertainty and anxiety of living at the time. Both dating from 1960, String Quartets Nos. 7 and 8 are truly intimate confessions. While Shostakovich dedicated the former (the shortest piece of the cycle) to the memory of his first wife, he most likely intended the latter as his own epitaph, at the time when be hovered on the thin line between life and death. The Pavel Haas Quartet surpass the abyss of time, as well as the barrier of personal physical existence, delving into the very centre of Shostakovich's mu­sic and reflecting the full scale of emotions with airiness, as if the music were their own. As Veronika Jarůšková put it: “It does not suffice just to play Shostakovich’s mu­sic, it has to be lived.”

Supraphon, the internationally renowned ensemble’s ex­clusive publisher, will be releasing the album on 25 October 2019. On that very day, the label will also issue a vinyl recording of the critically acclaimed 2015 CD of Bedřich Smetana’s String Quartets (Gramophone Award, BBC Music Magazine Award, and other accolades). The lovers of vinyl and perfect sound can look forward to a top-quality LP (180g virgin vinyl, DMM cutting), which will be supplemented by a digital version in Hi-Res.

The Pavel Haas Quartet launched their 2019/20 concert season in late September with a performance at the famed Tonhalle in Zurich. During the autumn, they will appear at other prestigious venues in Europe, such as the Muziekgebouw in Amsterdam, the Konserthuset in Stockholm, Wigmore Hall in London and the Sala Verdi in Milan. Moreover, the ensemble will make their debut in Israel, where they will play at the Rappaport Auditorium in Haifa and the YMCA Auditorium in Jerusalem. The Pavel Haas Quartet will also give their first concerts in Warsaw, at the National Philharmonic Chamber Hall, and at the Teatro Argentina in Rome. Their one and only performance on home soil before the end of this year will take place in December, within the Janáček Brno festival. In the second part of the season, the PHQ will continue to tour Europe, and they will also visit the USA, Canada, China and Singapore.