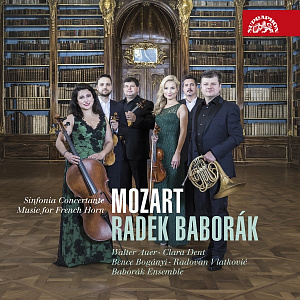 There is a very positive review in Fanfare magazine (March/April issue) for the Radek Baborák's album featuring Mozart's Sinfonia Concertante and Music fo French Horn, which was released in October 2018.

Fanfare is an American bimonthly magazine devoted to reviewing recorded music in all playback formats. It mainly covers classical music, but since inception, has also featured a jazz column in every issue.

„Baborák leads a pick-up orchestra (the Baborák Ensemble) and defers to his colleague Radovan Vlatković as the horn soloist. From the first notes, the listener is struck by the richness and depth of sound; it is difficult to accept that the tiny ensemble, consisting of a mere 13 strings plus pairs of oboes and horns, can sound like a full-size orchestra. The engineering is superb; one can almost imagine the old Philadelphia Orchestra coming from the speakers. Speaking of Philadelphia, both Stokowski and Ormandy recorded the Sinfonia concertante with the Orchestra’s le­gendary first-desk players (both recordings were with clarinet), but neither comes close to the performance we have from Baborák and friends. The playing from both soloists and orchestra is infused with the kind of drive, spirit, bloom, alertness, boldness – call it what you will – that commands undivided attention from beginning to end. Stokowski and Ormandy sound stiff and stodgy by comparison. Baborák’s per­formance manages to be both velvety and transparent – a winning combination. The soloists have been drawn from past or present posts in Europe’s most prestigious orchestras: the flute from the Vienna Philharmonic, the oboe and horn from the Berlin Radio Symphony Orchestra, the bassoon from the Munich Philharmonic. Everyone is on the same wavelength, phrases are lovingly and identically shaped, balance is perfect, and some of the virtuosic licks they toss off in the finale will make your hair stand on end.
If there is anything that might detract from the description of this release as “perfect,” it is just possibly that some listeners will feel that the musicians are too closely miked. But this only contributes to the brilliance of the performances, and the playing is absolutely flawless, so the issue hardly matters. This is an essential release for all horn players and all Mozart aficionados.“