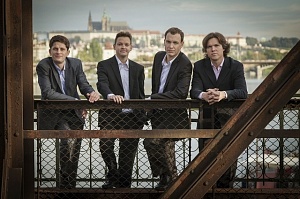 THE BENNEWITZ QUARTET TO RELEASE AN ALBUM

OF MUSIC BY THE THERESIENSTADT COMPOSERS

The fates of the composers whose works are featured in the Bennewitz Quartet’s new album were linked with the musical life in Czechoslovakia between the two world wars, as well as with the Jewish Theresienstadt camp-ghetto, and were afflicted by the monstrous Nazi regime.

Viktor Ullmann, who before WWII held the post of Kapellmeister at the New German Theatre in Prague, wrote his Quartet No. 3 while he was imprisoned in Theresienstadt. Hans Krása completed the Theme and Variations in 1936, yet he only saw it performed in Theresienstadt, along with his children’s opera Brundibár. Erwin Schulhoff’s Five Pieces for String Quartet reveal his zest for rhythm and dance, as well as his evidently having been inspired by the music played in the Viennese salons, Italy and Spain. Pavel Haas’s String Quartet No. 2, dating from 1925, goes to prove that he was the most gifted pupil of Leoš Janáček. In 1944, Haas, Ullmann and Krása were among the thousands of Theresienstadt prisoners transported to Auschwitz, where they would be murdered in the gas chambers.

Supraphon will release the album on CD and digital formats on 26th April 2019.

The Bennewitz Quartet launched their international career following their victories at the prestigious competition in Osaka (2005) and the Prémio Paolo Borciani in Italy (2008). Ever since they have regularly performed at the world’s most prominent venues (Wigmore Hall in London, Musikverein in Vienna, Konzerthaus in Berlin, Théâtre des Champs-Elysées in Paris, concert halls in New York, Seoul, etc.) and festivals (Salzburger Festspiele, Lucerne Festival, Rheingau Musik Festival, etc.). The music of the Theresienstadt composers has found in them splendid performers.

On the occasion of the release of the Bennewitz Quartet’s new album, we talked to the violinist Štěpán Ježek:

What was the major criterion when exploring these works?
The Theresienstadt composers’ music possesses many qualities. On the one hand, it is influenced by the modern compositional techniques of the first half of the 20th century – from the avant-garde to the highly intellectual approach typical of the Second Viennese School – on the other hand, it is interwoven with the traditional Czech softness, melodics and poeticism. We strove to render both of these contrasting facets.

Have you performed the works featured in the new album at concerts?
Yes, we have regularly performed the Theresienstadt composers’ pieces at concerts, in the Czech Republic and beyond alike. Even though much has been done for the music to become part of the general awareness, it is – regrettably – still being perceived as something that makes the programmes peculiar. With regard to the fact that we have striven to promote Czech music in general, these splendid, albeit lesser-known, works have afforded us the ideal opportunity to present programmes enriched with intriguing pieces.