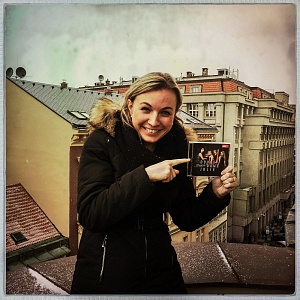 On 11th January, SUPRAPHON released the album of i Flautisti – The London Recorder Quartet titled Douce Dame Jolie. We asked Jitka Konečná, a member of the ensemble, a couple of questions about the new release, about her colleagues as well as about their plans for the future.

Could you introduce to us your ensemble, and reveal what prompted you to make an album for Supraphon?
We formed i Flautisti – The London Recorder Quartet during our time at the Royal College of Music. After completing our studies, we contemplated whether to carry on, as we were invited to give more concerts. We duly decided to continue, and this year we are celebrating ten years of our ensemble’s exis­tence. The new album is actually a musical commemoration of this anniversary.

How did you compile the repertoire for the CD?
In addition to early music, we also like performing contemporary pieces, therefore we have collaborated with several present-day composers, who have written for us a few “tailor-made” scores. We wanted to present these works to a wider audience, so we decided to record four of them in world premiere. The album also includes music of older eras – the Middle Ages, Renaissance and Baroque. And we have recorded two Romanian folk dances, as arranged by Jan Rokyta.

The booklet lists almost 20 types of recorders. How do you decide which member of your quartet will play the particular recorder?
Yes, we play many different types of recorder on the CD. When it comes to the earliest repertoire, we use Adriana Breukink’s copies of Renaissance Bassano consort recorders. We play Baroque pieces on instrument copies from Germany and Austria, and use modern instruments from Herbert Paetzold’s workshop when performing contemporary music. Even though we have not recently taken turns on all the instruments, at concerts in particular, each of us is capable of playing all the recorder types.

How popular is currently the recorder as an independent musical instrument?
The quality of playing the instrument in the Czech Republic has been markedly rising, notwithstanding that for the time being the recorder can only be studied here at secondary schools. Yet our colleagues abroad, with whom all of us have been in close contact and whom we have frequently invited to come here, have been very pleasantly surprised as to how high the local standard of playing the recorder at primary and secondary art schools is.

How have contemporary composers’ works for your ensemble come into being?
In most cases, the composers attended our concerts and were intrigued by the broad scale of timbres the recorder can generate. Although simple in constructional terms, it is feasible for plenty of modern techniques – you can play on certain parts of the recorder, create extraordinary sounds, etc.

Could you introduce to us your colleagues from i Flautisti?
Two of us are Czech, and we both work at conservatories. Ilona Veselovská teaches in Teplice, and besides the recorder she also studied the Baroque traverso, in the Hague. I teach at the conservatories in Olomouc and Ostrava. Doris Kitzmantel studied the recorder and the piano in Linz and Vienna, she works as an educator and is also a member of other chamber ensembles. Yu-Ching Chao hails from Taiwan and studied the recorder at prestigious music academies in Hamburg, Leuven, Amsterdam and elsewhere. Currently mainly living and working in Hamburg, she has performed all over the world.

Did you invite any guests to join you when making the recording?
We invited the percussionist Radek Tomášek, a member of the Brno Philharmonic and teacher at the Janáček Academy of Music and Performing Arts. He performed with us three pieces – in one of them he played the frame drum, in the other two the darbuka and the riq.

Will you also be performing the compositions featured on your new album at concerts?
Yes, the compositions included in the CD are among our favourites. That was one of the reasons why we have recorded them. As regards the current season, we have put together a programme of the same name as the album, Douce dame jolie, which is also the title of one of the pieces. We will soon give two concerts in the Czech Republic (Oslavany near Brno and Dolní Břežany), following which we are scheduled to visit Austria and then tour Taiwan.

You have held workshops within some of your concerts – could you describe them?
Our workshops have met with a great deal of interest, and we are very happy about it, of course. I am glad that this type of music is currently “en vogue”. Many educators are eager to familiarise themselves with our instruments. We strive to do everything in a manner that would be intriguing for pupils and their teachers alike. There are a lot of instruments out there, as are the performance styles, so it actually concerns lifelong work and self-education. Within our workshops, we give a brief concert, present various eras and musical styles, and then pursue a certain conception in an interactive way.

There is no doubt that musicians have many dreams and projects they would like to materialise. Could you tell us what you would like to include on your next album?
We have been giving thought to combining early and contemporary music. We would like to pay greater attention to J. S. Bach and put his works alongside pieces by the minimalist composer Fulvio Caldini.