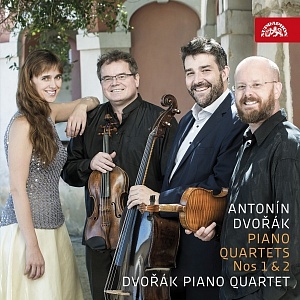 THE ALBUM OF DVOŘÁK PIANO QUARTET

There is a beautiful review of the ensemble Dvořák Piano Quartet and their album containing Dvořák's Piano Quartets Nos 1 and 2 in yesterday's Sun­day Times:

„Dvorak’s piano quartets — the first, in D, completed in 1875; the second, in E flat, at the height of his powers in 1889 — are less frequently programmed than his piano trios or quintets, but deserve attention, especially in such winning, idiomatic performances as these. The D major is, perhaps, too sprawling in design, but the composer’s inex­haustible stream of melody is beguiling. The later work is a neglected masterpiece, played here with native conviction.“
The Sunday Times, 13th January 2019