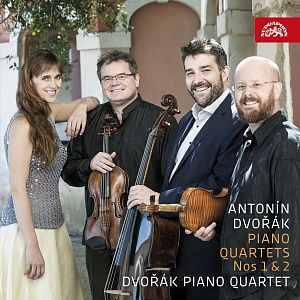 Antonín Dvořák has a passion for chamber music; he liked playing it with friends, and perhaps soon came to realis how good a commercial commodity such pieces represented. He wrote the first of his two piano quartets, Op. 23, at the age of 34, by which time many a publisher was interested in his works. The period Czech media voiced their satisfaction that Dvořák had moved beyond foreign influence, with the Slavic spirit having prevailed in his music. Cases in point include his Moravian Duets, Op. 20, and Serenades, Op. 22, created at the same time. The publisher Fritz Simrock bitterly regretted having rejected the first quartet, persistently reminding the composer: "I would gladly take a piano quartet, preferably even two". When in the summer of 1889 Dvořák got down to writing his second quartet, he complained of having a "slow hand", yet stressed that he had plenty of ideas: "My head is full of it ... I have finished three movements of a new quartet with piano, and the finale will be ready in a few days. It has gone smoothly beyond expectation, with the melodies rolling in to me." The sheer beauty of the piece was cogently described by the prominent Vienna-based critic Eduard Hanslick: "The quartet requires that the listener be considerably attentive and well informed, which, however, really pays off." The ensemble bearing the composer's name have linked up to the feted tradition of their great teachers - Ivan Moravec, Josef Vlach and Milan Škampa. They present Dvořák at his finest, both conventional and sophisticated.

“The Dvořák Piano Quartet, as their namesake implies, is one of the top Czech chamber ensembles at the moment. They blend together as if they had grown up together, and perform the music of Antonín Dvorák as if it was in their DNA. As a group, their expressive range is formidable and their individual techniques are quite impressive. Evidence of this is quite apparent in the way they play those shimmering – what I believe are called ‚sautilles‘ – at the end of the first movement of the second quartet. ”
Classical Music Sentinel, November 2018

“Dvorak’s piano quartets — the first, in D, completed in 1875; the second, in E flat, at the height of his powers in 1889 — are less frequently programmed than his piano trios or quintets, but deserve attention, especially in such winning, idiomatic performances as these. The D major is, perhaps, too sprawling in design, but the composer’s inex­haustible stream of melody is beguiling. The later work is a neglected masterpiece, played here with native conviction.”
The Sunday Times, 13th January 2019

“The softer string playing has a velvety gorgeousness which is balanced by some truly delightful, sparkling piano playing. The Lento of Quartet No. 2 is unforgettably, luxuriously expansive and dreamy, with superb blending of instruments…”
BBC Music Magazine, February 2019

“The opening Allegro moderato is the work's longest section and slightly overwhelms the remaining movements. But the strength of this new performance is the easy lyricism that the players find. The instrumental interplay is relaxed but perfectly judged – in the best sense – and no single player seeks to dominate the musical argument. Dvořák's melodic resource is always a source of wonder and he dives into the musical argument with yet another flowingly rapturous folk-influenced tune. Pianist Slávka Vernerová-Pěchočová is skilfully helped by the discrete Supraphon engineering, ensuring her part does not dominate proceedings and instead the piano emerges elegantly and effectively whenever it is required.”
MusicWeb International, February 2019

“The Dvořák Quartet’s pianist, Slávka Vernerová-Pěchočová, sets the scene in the fourth with just the right degree of drama to the rolled chords, while the players capture to a nicety the fraught quality of the fifth variation and the gently consoling coda. The genial finale comes across well too.”
Gramophone, March 2019