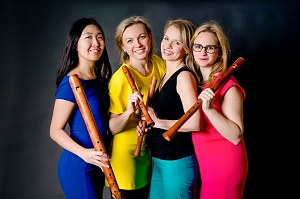 THE NEW ALBUM OF i FLAUTISTI

i Flautisti – The London Recorder Quartet got together in 2009 at the Royal College of Music in London. „We deemed the title i Flautisti apposite, as it characterises us as flautists,“ says one of the ensemble’s members, Ilona Veselovská, adding: „One of us is from Austria, another from England, and two players are from the Czech Republic … consequently, it is quite difficult to organise the rehearsals and concerts. We don’t have any frontwoman – all of us are equal!“

i Flautisti – The London Recorder Quartet simply could not have been formed elsewhere but in England, the cradle of „consorts“, ensembles of the same or a variety of instruments. The music they produce is a true feast – not only for the ears but also the eyes, as some recorders are quaintly shaped. The ensembles are thus similar to the London architecture, depicting the colour of the city, which has inspired i Flautisti to seeking their repertoire across epochs and nations – between the 14th and 21st centuries, between Moravia and Belgium, England and Germany. „We aim to show that the recorder is not just a starting instrument for many musicians, we strive to demonstrate that truly great things can be done with it,“ Ilona Veselovská points out.

The composers who have created music for i Flautisti include such celebrities as Tarik O’Regan and Nathan Theodoulou. The ensemble have appeared at renowned festivals and led master classes in the UK, Germany, Switzerland, Austria and the Czech Republic. Their live performances have also enchanted BBC Radio 3 and BBC Radio 4 listeners.

The present recording serves to mark the ensemble’s 10th anniversary, featuring ten pieces that have earned i Flautisti – The London Recorder Quartet enthusiastic responses at concert venues. The album organically blends the Middle Ages and Baroque with torrential Balkan rhythms and the contemporary world. Yet you should not approach the modern tunes with trepidation: i Flautisti present (for the most part in world premiere) music that is beautiful, comprehensive, often catchy even.