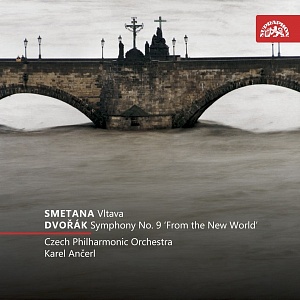 Smetana: Vltava - Dvořák: Symphony No.9 in E minor "From the New World"

This CD is a must-have for everyone who wants to gain an awareness of Czech music, its most frequently performed and most frequently recorded compositions. A recording from an orchestra synonymous with the two great composers. And the conductor who introduced the Czech Philharmonic to the world.
Smetana wrote Vltava less than two months before suddenly losing his hearing. It was an emphatic answer to the speculations that this tragic circumstance would put an end to his compositional career. The "Story of a Czech River" would become a symbol of everything Czech, a hymn celebrating the Czech land, the Czech nation and its traditions. On the other hand, Dvořák's time in America, crowned by the triumph of Symphony No. 9, "From the New World"vo, clearly demonstrated the international quality of Czech music - the power of its heredity as well as the ability to reflect and co-create the development of music in the world. Smetanawas at the birth of the "Czech music" phenomenon, while Dvořák ensured that this phenomenon became known worldwide.

Karel Ančerl in turn succeeded in transforming the Czech Philharmonic into a world-renowned orchestra, an ensemble authentically and inimitably representing Czech music and musicality from New York to Tokyo.