Fratres for male voices and 2 cellos 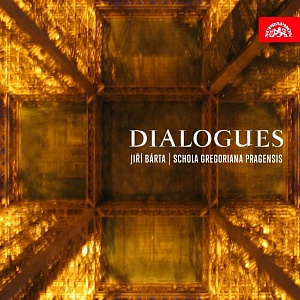 The renowned ensemble Schola Gregoriana Pragensis and the leading Czech cellist Jiří Bárta have been pursuing dialogues on concert stages for a number of years. They share abundant experience ofmusic both early and contemporary, improvisation and seeking. The fruit of their encounters is a recording that is a multilayered dialogue between the sonorous sound of the cello and the male voice, a dialogue between the chorale and medieval polyphony and the creation of the past few decades, music written and improvised. The idea of "mirroring the past in the present" isthe overarching theme connecting pieces by contemporary composers. Peter Graham's Suite for Cello Solo reveals his having been inspired by Bach solo suites. The contemporary musical phraseology and the Gregorian tradition are originally interconnected in the meditative composition Miserere by the Polish creator Paweł Szymański, while the structure of Arvo Pärt's famous piece Fratres is a sort of reminiscence of medieval polyphony. The music, in places verging on silence, affords the listener scope for inner soothing and perception of fine nuances that often remain concealed tous in the turbulent world around.

“Very often, „crossover“ means musicians talking (or singing, or playing) past each other. This is something rather different, and the tone is set by the appearance of the solo cello playing the chant with the excellent singers of Schola Cantorum Pragensis. It's intriguing and beautiful…Recording quality is excellent, and no vocal or instrumental subtlety is lost. Highly recommended.“
Gramophone, December 2010