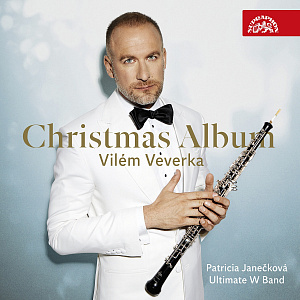 Christmas and its singular atmosphere have inspired numerous musicians and composers over the centuries. Following several “conventional” albums and the crossover project “Next Horizon”, the oboist Vilém Veverka too has succumbed to the irresistible Yuletide charm and decided to present “his Christmas”. The album’s leitmotif is Antonio Vivaldi’s L'inverno (most likely performed on the oboe for the very first time!). In addition to pieces by other Baroque Masters (Bach, Handel), it includes a musical account of Argentinean tango-flavoured winter (Ástor Piazzolla), as well as the songs Stille Nacht, Adeste fideles and Chtíc, aby spal (Wanting Him to Sleep), without which one would be hard pressed to imagine Christmas. The album is adorned by Patricia Janečková’s gracious voice, and it features two very special guests, the harpist Kateřina Englichová and the soprano Adéla Řehořová. As in the case of other Veverka CDs, Martin Hybler has contributed with arrangements, and the soloist is accompanied by the same musicians he was on the previous project, “Next Horizon”. Owing to its encompassing a wide range of genres and neoclassical arrangement, the album will undoubtedly delight not only virtuoso oboe lovers, but also many other listeners.