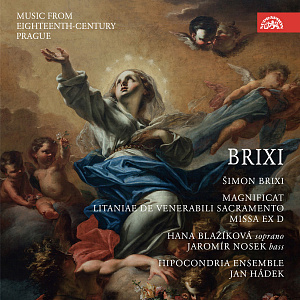 In the first third of the 18th-century, Prague was a major music centre, with Italian operas and concertos, French suites, Italian and German oratorios being performed in the city, and the local churches striving to acquire the latest and most virtuosic compositions. Šimon Brixi was one of the most distinguished composers who drew inspiration from this thriving culture, while creating highly inventive music of his own. He mainly wrote liturgical pieces, yet few of them have survived. Brixi gained great acclaim for his musicae navales for the popular Saint John of Nepomuk Festivities in May on the river Vltava. Although he did not publish his scores, Brixi was a renowned composer and his music was frequently performed. Copies of his works were possessed by, among others, Jan Dismas Zelenka. Brixi mastered all the styles and techniques of his time, ranging from rigorous counterpoint to elements of the nascent Galant style. The works are arranged on the album in a one-day liturgical arch, with the morning mass followed by litanies and the canticle Magnificat from vespers, which owing to its style and high technical requirements may bring to mind Zelenka's music. Made up of superlative soloists, Hipocondria Ensemble bring back to life Šimon Brixi's overlooked works. Their recording of the Magnificat is the first made on historical instruments.

Šimon Brixi - a composer whose music deserves a second life after three centuries.