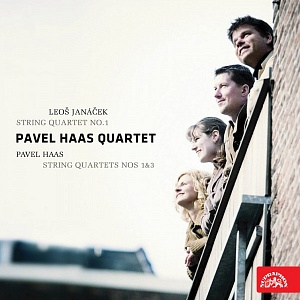 Spotify
Catalogue Number: SU 3922-2
Published: 27th September 2007
Genre: Chamber Music
Format: 1 CD
This album has received following awards:
The Pavel Haas Quartet's debut album (Janáček, Haas - String Quartets, SU 3877-2) was greeted with widespread enthusiasm, winning a number of awards for the ensemble (BBC Music Magazine Award 2007, Newcomer of the Year; Classic FM Gramophone Awards 2007, Chamber Award). This September, the quartet became part of the BBC New Generation Artists program. This new album completes theirrecordings of the Janáček and Haas quartets, bringing practically unknown works by this noteworthy 20th century composer to the attention of music lovers today. Janáček's first quartet, with its intimacy and mounting eroticism, is uunusually close to the hearts of the young ensemble. Written in only nine days (!), this four-movement composition is Janáček's most concise and also most tragic musical drama. Janáček's student Pavel Haas wrote his first string quartet, a ten minute sonata allegro movement in fantasia style, in 1920 while still a student at Brno Conservatory, and the Haas Quartet's rendition is remarkably expressive. Haas wrote his third quartet in 1938 at the peak of his creative life. The piece is marked by the drama and tragedy of the era's rapidly burgeoning Nazi movement: in 1941 Haas would divorce his wife to save his family, in 1941 he was arrested and deported to the Jewish ghetto in Terezín, and in 1944 hewas sent to Auschwitz…

“It's an outstanding disc from this young Czech ensemble, up there with the finest modern recordings and it's the CD Review disc of the week.”
BBC Radio 3, November 2007

“The young Prague ensemble address this music on merit, without a hint of sentimental retrospect. The sheer brio of their playing invests all three works with such vigour and narrative momentum that they sound like a first performance, fresh off the page.”
Evening Standard, December 2007

“Demonstrating the same boldness and originality that characterised their stunning debut disc the Pavel Haas Quartet, armed with a new second violinist, deliver totally compelling and warmly recorded performances of the Janáček First Quartet and the First and Third Quartets by their namesake.”
BBC Music Magazine, January 2008

“The Haas Quartet negotiate Janáček's fervid narrative without over-playing the drama, and they obviously relish its novel and occasionally abrasive sound world… This is a superb release that deserves not merely bask in the reflected glory of its predecessor, but to share in it. The sound is first-rate.”
Gramophone, April 2008

“A visceral and luminous account of ‚The Kreutzer Sonata‘”
Presto Classical, May 2014