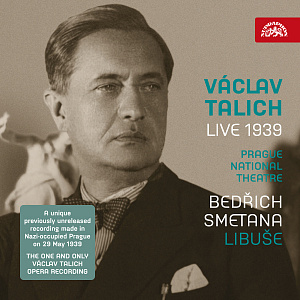 “Libuše’s final scene, in which the clairvoyant monarch predicts the historic triumphs of the Czech people and includes the famous line ‚My dear Czech nation shall not perish, it shall triumph over all terrors‘ must have sounded, in 1939, like a bold declaration of national pride. The long and tempestuous applause, during which the audience spontaneously bursts into the Czech national anthem, provide this new release with a unique and touching energy.”
Opera+, June 2020

“If Smetana embodied the heroic impulse in his people, so too did conductor Vaclav Talich (1883–1961), the sensationally gifted acolyte of Czech music well documented in the symphonic repertory of Smetana, Dvorak, and Suk… Immense and intensive labors from Milos Guth and Jan Lzicar have managed to reconstruct Act III in its fragmented form, still a brilliant testament to human will and artistic integrity that ends climactically with an inflamed audience – used to holding hands during the aria – moved to sing collectively the Czech National Anthem after their long, tumultuous applause.”
Audiophile Audition, September 2020