Concerto for Viola and Orchestra 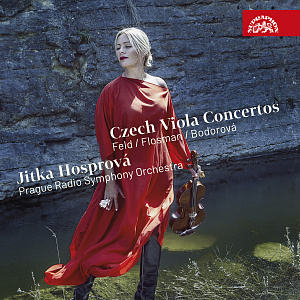 The viola's dark, velvety sound and its depth of expression enchanted many composers of the twentieth century (Bartók, Martinů, Hindemith, Clarke etc.) who made major contributions to the instrument's repertoire. Jitka Hosprová, however, likes to stay off the beaten path. For her recording with the Prague Radio Symphony Orchestra, she has chosen three modern works composed in her homeland over a span of 30 years at the turn of the 20th and 21st centuries. Oldřich Flosman completed Visions of Michelangelo, a work that is now nearly forgotten, in 1975 on commission for celebrations of the 500th anniversary of Michelangelo's birth. Jindřich Feld's Viola Concerto, one of his last works, bears comparison with Bartók's and even exceeds it in terms of technical difficulty; the demands made on the soloist are quite extreme. Sylvie Bodorová's Planctus (the title refers to a Medieval form, the "laments of the Virgin Mary") reflects the gloom, stress, and hopelessness of life in communist Czechoslovakia of the 1980s. In all three movements, the deep intimacy of the viola stands in contrast to the massive symphonic sound of the orchestra. More than any other instrument, the viola has a tone that reaches the innermost world of the composer and of the subject matter. On this revelatory, technically virtuosic recording of rarely played works, Jitka Hosprová brings back to life three works that definitely deserve the attention of performers and listeners.


Modernity and traditional form, totality and freedom - three Czech viola concertos from the turn of the millennium

“What is immediately striking here is the rich baritone tone of Jitka Hosprova’s viola, which she plays with consummate authority… If you have a chance to hear Jitka Hosprova in person, drop everything and go to hear this stunning musician with the catholicity to incorporate on one album two composers on opposites sides of the Czech communist divide.”
American Record Guide, August 2020