Darkness and Thunderclouds Are Round About Him - Andantino 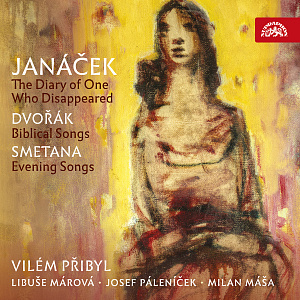 Janáček: The Diary of One Who Disappeared - Dvořák: Biblical Songs - Smetana: Evening Songs

The reissue of the recordings made in 1978 and 1988 pays tribute to the unforgettable Czech tenor Vilém Přibyl's superb performance of three extraordinary Czech song cycles. The artist dazzled several generations of music-lovers in Bedřich Smetana's and Leoš Janáček's operas. His professional career was mainly connected with Brno, where he lived and worked for three decades. Moreover, Přibyl performed as a guest at the National Theatre in Prague, and he also impressed audiences in Edinburgh, London (Royal Opera House), as well as in France, Italy and the USA.
The three song cycles are deemed to be the best works in the genre created by Smetana, Dvořák and Janáček. They are fundamentally different in terms of inspiration. While in his short cycle Evening Songs Smetana sumps up his lifelong endeavours and experiences, Dvořák's Biblical Songs represent the composer's intimate prayer and thanksgiving. In The Diary of One Who Disappeared, Janáček' depicts the story of a village boy who madly falls in love with a beautiful gypsy girl.
The benchmark historical albums are as enchanting today as they were decades ago.

“Přibyl’s voice is superbly secure and characterful – and often very beautiful in its distinctive colour… No Janáček fan will want to be without this in their collection, and the excellent couplings only heighten the appeal: a wonderfully noble account of Dvořák’s Biblical Songs and a touching performance of Smetana’s Five Evening Songs, a collection notably badly served in the catalogue. A very welcome reissue.”
Gramophone, November 2019

“In the years since it was issued on LP a number of recordings have sought to scale the heights of the Janáček songs in particular but none has threatened Přibyl’s authority and Josef Páleníček’s piano contribution served only to reinforce the clarion and declamatory qualities generated in this performance… These outstanding performances have withstood time’s scrutiny with the greatest authority.”
MusicWeb International, November 2019

“The performances are strong and vivid. His voice is clear and expressive… these Supraphon recordings are of high quality.”
American Record Guide, January/Febru­ary 2020

“Vilém Přibyl and Libuše Márová’s singing of The Diary of One Who Disappeared make this a disc to treasure.”
Fanfare, March/April 2020