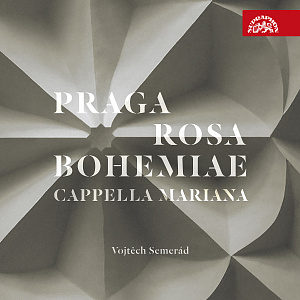 “You will enjoy every minute of this excellently programmed and exceptionally well-sung recording. In fact, while the music is uniformly first rate, you may be even more impressed by the performances by the Czech ensemble Cappella Mariana, six singers (two sopranos, alto, tenor, baritone, bass) whose artful interpretations, expert ensemble execution, and vibrant, perfectly tuned sound give well-deserved life to whatever they sing, whether or not we’ve heard of the composer or work in question.”
ClassicsToday.com, November 2019

“Cappella Mariana is a group of six Czech singers, many of whose members are familiar from other recordings of early music. The intonation and ensemble of these singers are the equal of other, more famous small groups, such as the Binchois Consort or Cinquecento. Both the quality of the performance and the significance of this repertoire make this a strong recommendation for any collection of renaissance music.”
American Record Guide, January/Febru­ary 2020

“It is to be hoped that more music from Renaissance Bohemia will be performed and recorded. I can hardly imagine a better ensemble for that task than the Cappella Mariana. Seldom I have so much enjoyed the singing of an ensemble of this kind. The two brilliant sopranos, Hana Blazikova and Barbora Kabatková, have a substantial influence on the sound this ensemble produces. Not only blend the voices perfectly, the singers also shape the lines beautifully and create a nice but never exaggerated dynamic shading… This disc offers the perfect combination of an interesting programme and superb singing. It goes straight to my list of recordings of the year.”
MusicWeb International, March 2020