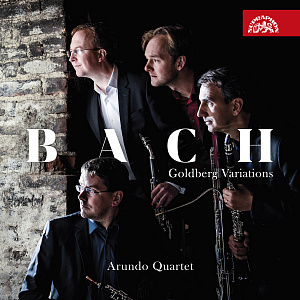 The legendary Goldberg Variations are among the most frequently recorded Johann Sebastian Bach works; besides numerous versions for piano and harpsichord, there are recordings of transcriptions for other instruments, including the banjo. Even though at first glance the arrangement for wind quartet appears overly distant from the composer's original notion, when listening to it you may have the feeling that Bach himself might have had such an ensemble on his mind when writing the work. The reed instrument timbers wonderfully merge into joint harmony, while their shadings allow for tracing the leading of the individual parts within the polyphonic texture, which is most definitely an advantage as against the original keyboard version. The Aria and the 30 Variations afford sufficient scope for cantilena and foregrounding of the instruments' gracious colours, as well as for showcasing their uttermost virtuosity. The intimate universe of the Goldberg Variations is followed by the festive Suite in C major, BWV 1066, the earliest and the "most French" of Bach's four orchestral suites. The remarkable album has been made by four extraordinary musicians, superb soloists and chamber players, who have adorned some of the most renowned orchestras, including the Berliner Philharmoniker and the Czech Philharmonic.

The Goldberg Variations in the lovely colours of woodwinds

“I like this a lot; the clarity of the counterpoint, the individual timbres of the instruments and the spaciousness of the recording.”
BBC Radio 3 Record Review, April 2019

“It’s the combination of instruments that makes it so successful. There is, for example, a fairly magical quality to the Aria, the oboe singing with translucent beauty, with the clarinet’s very different cantabile taking over for B section. Meanwhile the bassoon quietly upholds the bass line, before becoming untethered in the first variation. It’s remarkably effective, and demonstrates the importance of balance.”
MusicWeb International, October 2019