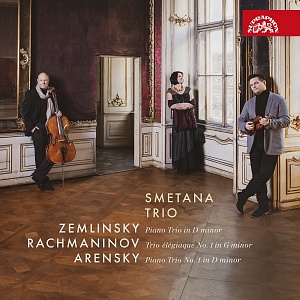 The three pieces the Smetana Trio have selected for their new album came into being within the range of a mere four years, yet they represent three different musical universes. Anton Arensky's piano trio evokes the atmosphere of the 19th-century salons, where music was played to delight the gathered bourgeoisie company. The work Alexander Zemlinsky created at the age of 25 marks the accession of the seeking of new sound and harmony. The one-movement trio Sergei Rachmaninoff, a piano virtuoso and composer rolled into one, wrote when hew was 19, teems with elegiac nobleness, which would remain the quintessential trait of the future globetrotter's music. And whereas Arensky's short life was marred by inner turmoil, the paths of Zemlinsky and Rachmaninoff were affected by outer circumstances - both of them died within a year, far away from their respective homelands, in the United States. With their typical vivacity and zest, the internationally renowned Smetana Trio perform three remarkable compositions dating from the late 19th century.

“The Smetana Trio’s perfor­mances, as captured in Supraphon’s warm recording, are totally compelling. It’s no mean feat that the players not only negotiate the ebb and flow of the musical argument in each work with tremendous flexibility of nuance, but that their imaginative approach to balance and texturing ensures that the listener is completely involved in the drama from first bar to last.”
BBC Music Magazine, June 2019

“The Smetana Trio is one of those groups in the grand Czech tradition; this latest line-up features three formidably fine musicians… The Smetana’s slower tempo for the Adagio plays up its elegiac quality, giving it a sombre beauty that is very telling. The finale has a real drama and drive, the Smetana making much of the contrast between jagged energy and the more lyrical moments. The reintroduction near the close of the theme that opened the work makes for a touching farewell, and is particularly potently realised by the Smetana Trio.”
Gramophone, June 2019

“All the virtues the Smetana Trio brought to bear on the two previous works are again in evidence. The interplay between the instruments is excellent. It is aided in no small way by the detailed Supraphon engineering which always allows each instrumental line to register without the ear being aware of any synthetic spotlighting. This is a wonderfully Romantic performance with a capital R… Familiar music uniquely coupled makes this a very attractive disc indeed.”
MusicWeb International, May 2019