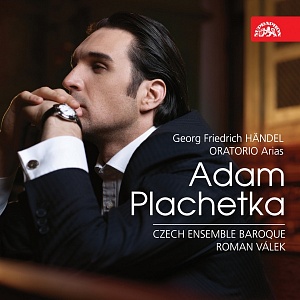 The oratorios represent the apex of Händel's professional career and they even saved the composer when he was facing repeated crises of his operatic enterprise. These works of his have remained in the European repertoire and even if Händel hadn't written anything else, his Messiah alone would have earned him immortality. The programme of this CD is made up of arias that Händel wrote in his oratorios for bass or bass-baritone - the vocal category embodying heroism, enduring faith and resolve. Owing to his distinct masculinity, combined with determination, pleasantly tinted timbre and natural musicality, Adam Plachetka, a soloist of the Wiener Staatsoper, is an ideal singer to portray such Handel roles. A watershed in the artist's meteoric career came in September 2011, when Plachetka dazzled the Viennese audience in the title role of Mozart's opera Don Giovanni. On this recording, the soloist has a worthy partner: the superlative Czech Ensemble Baroque, conducted by Roman Válek, who prove beyond all doubt that Händel is not the exclusive preserve of the English.

”The Czech Ensemble Baroque Orchestra play solidly and Adam Plachetka's rich yet supple singing is up to the task most of the time.”
Gramophone, Awards Issue 2013