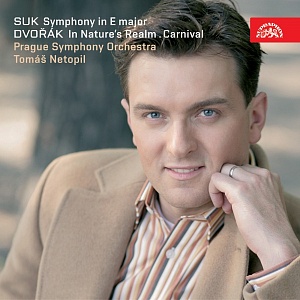 Spotify
Catalogue Number: SU 3941-2
Published: 15th February 2008
Genre: Symphony
Format: 1 CD
Dvořák's overtures In Nature's Realm and Carnival, completed in 1892, need no introduction. The case, however, is different with Symphony in E major, which Suk began composing a mere five years later, as Dvořák's pupil. The symphony is - notwithstanding the composer's tender age, 23 - a manifestation of absolute artistic maturity and independence. In 1899 the work was premiered by the Czech Philharmonic Orchestra conducted by Oskar Nedbal. Following the older recording by Václav Neumann with the Czech Philharmonic Orchestra, this unjustly overlooked work is broughtto listeners by the Prague Symphony Orchestra under the baton of the promising young Czech conductor Tomáš Netopil. A pupil of Jiří Bělohlávek and holder of a number of awards (victory in the Georg Solti Conductors' Competition in Frankfurt, the main prize of the American Academy of Conducting in Aspen in 2003), Netopil already has a wealth of international experience behind him (Cleveland Symphony Orchestra, London Philharmonic Orchestra, NHK Symphony Orchestra Tokyo, Volksoper Wien, Teatro Regio Torino, etc.). The youthful Netopil has a firm grasp of Suk's juvenility, however, he strips away the silt of the commonplace even from notoriously famous Dvořák works, affording them a fresh and novel sound.


Youth and maturity complement each other in Suk'sSymphony and Tomáš Netopil's interpretational conception.