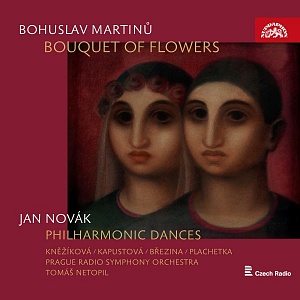 iTunes
Spotify
YouTube Music
Deezer
Catalogue Number: SU 4220-2
Published: 16th November 2017
Genre: Orchestral
Format: 1 CD
This album has received following awards:
Bohuslav Martinů and Jan Novák shared similar fates - both of them left their country and wandered around the world. The two composers also had a relationship as a teacher and pupil. Novák referred to his studies with Martinů in New York in 1947 as having had a major impact on his development as a music creator and human. Martinů's influence is palpable in Novák's Philharmonic Dances (Choreae Philharmonicae, 1956), three symphonic fantasies that provide wide scope for showcasing the virtuosity of both the soloists and the groups of instruments. The present recording of the work (the very first made in a studio) helps us to pay off our great debt to Novák, an artist who gave preference to being a "free exile" against having to breathe the oppressive air in his homeland, reigned over by a dictatorial regime. The album's centrepiece is a new account of Martinů's Bouquet of Flowers, a landmark recording of which was made in 1955 by Karel Ančerl, conducting the Czech Philharmonic. The composer never got to hear the piece performed in public yet he had the chance to listen to the gramophone record sent to him at his friend's house at Schönenberg, where he had found a temporary home. Some 60 years later, the Bouquet of Flowers has now been let blossom in its entire beauty by Tomáš Netopil, one of the most distinguished contemporary Czech conductors. Drawing upon traditional Moravian songs as the major and irreplaceable source of inspiration, one that had a marked influence on his singular musical idiom, Martinů solely based his Bouquet of Flowers on folk ballads - and the performers have duly approached it with the loving care and tenderness of seasoned gardeners.

“Bohuslav Martinů lived in Paris through the 1920s and got swept up in the city’s jazz and avant-garde scenes. Then in the early 1930s he turned his attention back to his native Moravian folk culture and wrote earthy, angular music that fused the lot – including his 1937 cantata Bouquet of Flowers. It’s for children’s chorus, soloists and orchestra and there’s no danger of missing the smell of the soil in these pungent tunes. However, between the carols and cowherds come moments of impressively stark modernism, which this account really illuminates. The voices of Kateřina Kněžíková and Michaela Kapustová are particularly rich together and Tomáš Netopil conducts with a grand sweep.”
The Guardian, December 2017

“Although Ančerl’s recording has been issued several times over the past 50 years, it is currently unavailable. Tomáš Netopil’s new account is a more than satisfactory alternative, gentler and softer than the older version but with no loss of precision, not least in the folk-cum-Stravinskian rhythms. To cap it all, the first studio recording of Jan Novák’s scinti­llating, Martinů-esque Philharmonic Dances (1955 56): why has it taken 61 years for this terrific tribute to the Czech Philharmonic to arrive in the studio? Buy and enjoy!”
Gramophone, February 2018

“An idiomatic performance of Bouquet of Flowers, an engaging cantata based on folk song, and displaying hints of Janáček and Stravinsky.”
BBC Music Magazine, March 2018

“For those who love Czech music, this is a highly valuable disc. For those, like me, passionate about Martinů, it is indispensable… Performances throughout are excellent. Recordings are clear, and Netopil is emerging as a formidable musician. I have been impressed by previous recordings, and the Czech musical tradition seems very safe under his direction.”
MusicWeb International, April 2018

“A genuinely wonderful piece, and one which poor Martinů never got to hear live. He’d have appreciated you buying this superb performance, with soloists, choirs and orchestral forces under Tomáš Netopil performing as if possessed… The three folk-inspired dances are deceptively weighty numbers, superbly orchestrated. The last one closes magnificently, brass ringing out over scurrying strings like a Slavonic remix of Britten's Young Person’s Guide. Quite brilliant – purchase forthwith (Novák).”
Arts Desk, May 2018