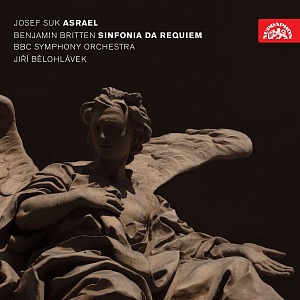 A unique and symbolic encounter: the most distinguished Czech conductor of the present time and a fabulous British orchestra communicate the profound messages in the works of great national composers. Jiří Bělohlávek has mediated Czech music to orchestras and audiences worldwide, yet in 2006 - as chief conductor of the BBC Symphony Orchestra - he became above all a Londoner. The recording at the 2008 Prague Spring festival of Suk's Asrael and Britten's Sinfonia da Requiem will for ever serve as evidence of the extraordinary understanding between Bělohlávek and the orchestra. The common denominator of the two works is the figure of the Angel of Death. A sad and immensely powerful inspiration for Suk was the passing away of his beloved wife Otilie and his dear teacher Antonín Dvořák. Britten's Sinfonia da Requiem, dedicated to the memory of his parents, is one of the composer's early masterpieces. The recording marks a symbolic leave-taking on the part of Bělohlávek, who after six intense years as chief conductor of the BBC Symphony Orchestra is returning "home" to the Czech Philharmonic.

Suk and Britten, Bělohlávek and the BBC Symphony Orchestra - a meeting of the powerful traditions of English and Czech classical music.

”Here's a timely reminder of the profundity Jiri Bělohlávek could achieve during his impressive years as the BBC Symphony Orchestra's chief conductor…Běloh­lávek caps Vaclav Neumann's earlier recording on Supraphon and matches the luminosity of Rafael Kubelik's inter­pretation on Panton.”
BBC Music Magazine, 2012

”There's absolutely no denying the impressive rigour and shrewdly calibrated dynamic control of Belohlavek's me­ticulously prepared conception…All told, a memorably nourishing and, by the close, profoundly moving display, which is rightly afforded an enthusiastic reception…No doubt about it, this is a release that reflects enormous credit on all concerned.”
Gramophone, October 2012

”The Britten receives a fine performance. The doom-laden opening, with its pounding drums, augurs well and you can tell that Bělohlávek has established a firm grip on the music from the outset…Though the performance of Sinfonia da Requiem is a fine one, Bělohlávek’s ac­count of Asrael is finer still…From the outset the BBCSO projects the music strongly and eloquently.”
MusicWeb International, August 2012

”Here are two fine memories of a fruitful tenure…The BBC players respond to fevered yet cogent direction with a rare but palpable intensity.”
The Sunday Times, 5th August 2012

”There's a real lowering intensity to the first movement [of the Sinfonia da Requiem], and a manic desperation to the second, so that the consolation offered by the finale really seems to have been earned.”
The Guardian, 2nd August 2012

”The orchestra gives its collective all and this version gets a strong recommendation…”
Gramophone, June 2018