Concerto for Harpsichord and String Orchestra No. 1 in D minor, BWV 1052 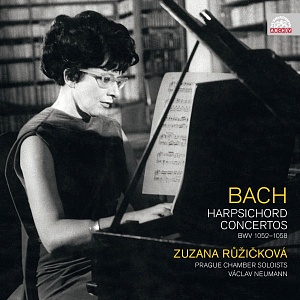 Deezer
Catalogue Number: SU 4222-2
Published: 21st April 2017
Genre: Classical
Format: 2 CD
"Bach saved my life… You always feel in his music that God is present somehow." This is not empty declamation. It is a deep confession of harpsichord player Zuzana Růžičková, a survivor of the inconceivable horrors of the Nazi concentration camps of Terezín, Auschwitz and Bergen-Belsen. She always felt that Bach's music was one of the things that helped her survive. In a certain way this is also true the other way around: Zuzana Růžičková gave new life to Bach's music by persistently promoting the use of harpsichord (as opposed to commonly used piano) in performing Bach repertoire in concert. She was the very first person to initiate the gigantic project of recording the complete harpsichord concertos composed by Bach. This project included the Supraphon recording she made with conductor Václav Neumann and their ensemble at the unsettled time of the Prague spring of 1968 and the subsequent invasion of the Soviet Army into Czechoslovakia. "The sessions had to be interrupted due to the occasional crack of gunfire or the rumble of tanks passing by the Rudolphinum." One thus might be tempted to label the recording "a historical document" and put in the archive drawers. However, this would be a mistake, because Zuzana Růžičková understands the deep inner order and the hidden emotionality of Bach's music so well that her recordings of his works remain no less inspiring at the present time that seeks historical authenticity.