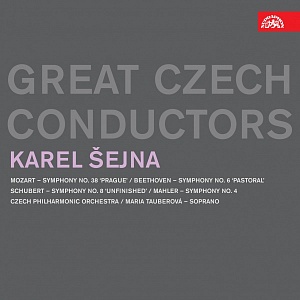 Rarely mentioned in the same breath as his illustrious colleagues Talich, Kubelík and Ančerl, Karel Šejna (1896-1982) was perennially second-in-command, yet despite failing to receive the credit he deserves he too played a crucial role in shaping the history of the Czech Philharmonic. Initially solo double-bass of the orchestra, he began conducting upon Václav Talich's request and in 1939 was officially named its second conductor. And he also remained deputy after the departure of Talich, who was replaced by Rafael Kubelík, as well as after Kubelík's emigration, when Karel Ančerl was appointed (originally against the orchestra members' will) to the vacant post of chief conductor. Consequently, still playing "second fiddle", Šejna went on to conduct dozens of concerts and make numerous recordings, which today rank among the finest in the Supraphon archives. Period critics branded him a flexible and vivid conductor who always required an understanding of the style and consistently worked with detail. In 1972, Šejna rounded off a half-century of work for the Czech Philharmonic with Mahler's Symphony No. 4. Šejna's sensitively remastered recordings from 1950-1962, from the bracing Mozart played "with a light hand" to Mahler's fourth, are now released by Supraphon for the first time on CD.

Karel Šejna and the Czech Philharmonic - newly discovered treasures from the Supraphon archives, for the first time on CD.