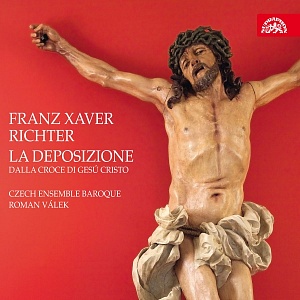 When Franz Xaver Richter became member of the famous Mannheim orchestra in 1746, he found himself in the very centre of the progressive European music scene where a new era was being born in a proverbial melting pot of various influences. However, Richter never gave up his traditional baroque "craftsmanship" and after making himself acquainted with the most successful oratorio libretto by G. C. Pasquini, he set it to music entirely within the boundaries of his characteristic style, combining baroque composition principles (Fux-like counterpoint choruses) with the achievements of the nascent classicist style. For this he used the new 1744 version of the libretto intended for J. A. Hasse. La Deposizione, Richter's only Italian oratorio is a Goog-Friday pondering of Jesus's disciples over God's unconditional love and Christ's suffering on the cross. For the first time (and probably also the last) it was performed on the Good Friday of 1748 in the Mannheim court church of The Visitation of Our Lady. After the Strassbourg Requiem (Supraphon SU 4177-2), this premiere recording is another gemstone that the Czech Ensemble Baroque have added to the mosaic of Richter's remarkable, still little-researched oeuvre.

The World Premiere of the Only Italian Oratorio by F. X. Richter

“Recorded in a richly resonant church acoustic, the balance of the recording manages to convey detail and rhythmic impact while preserving the spacious quality of the venue. The soloists are all excellent, the orchestra colourful and vibrant. There are only three choruses, but these are true highlights, adding weight by bookending the first part and rounding off the finale with some superb music.”
MusicWeb International, September 2017