Toccata and Fugue for Organ in D minor, BWV 565 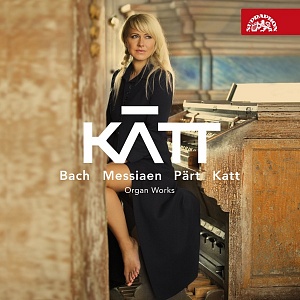 This is a story. It begins in a faintly familiar manner, yet after a while it takes you to never-thought-of regions where, besides the organ, Pärt's "spiritual minimalism" and Messiaen's heavenly birdsong, you encounter - unexpectedly and persistently - the human voice, in its full emotionality and tenderness. KATT is an element tearing down walls, including those between genres. Study at prestigious schools (the Schola Cantorum Basel among them) and collaboration with outstanding orchestras (Anima Eterna, the Royal Flemish Philharmonic, etc.) have led her to masterful performance of music ranging from Bach to young composers of her generation. Her intuition and fascination with the sonic potentialities of the organ (particularly the incredible plethora of delicate timbres and tinges!) have led her even further - to creating her own pieces and, ultimately, to employing her own voice. She draws inspiration from the songs of the earliest Christian traditions, from sacral architecture, as well as the atmosphere of the moment. You may choose to listen attentively to the pieces by Bach, Messiaen and Pärt, splendidly and singularly performed on the wonderful four-manual organ of the Basilica in Echternach, Luxembourg's oldest town. Or you may choose also to accept the invitation to immerse yourself in a story and witness a fascinating quest.

KATT - a story of the organ and voice, a story of seeking one's own path.

“A player of considerable ability, her fascination with minimalist patterns is shown well in her own work, Slavkof, contrasting reflective and brilliant writing…her singing in two works based on old chant will surprise many – ranging from a whisper to a shout”
Choir & Organ, August 2016