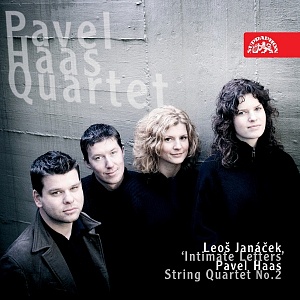 amazon.com
amazon.de
amazon.co.uk
amazon.fr
amazon.it
amazon.es
amazon.ca
Catalogue Number: SU 3877-2
Published: 11th August 2006
Genre: Chamber Music
Format: 1 CD
This album has received following awards:
The Pavel Haas Quartet, a young ensemble named after a significant 20th century Czech composer, has very quickly attained a place among the top quartets. The ensemble won the Prague Spring International Music Competition in May, 2005, and took first place at the prestigious Premio Paolo Borciani competition in Reggio Emilia, Italy one month later. The prize included a tour of more than 40 concerts throughout Europe, the USA and Japan, including performances in Brussels, Vienna, Hamburg, Rome, Venice, Los Angeles, Tokyo and Paris. For their recording debut, the ensemble has chosen Leoš Janáček's greatest work, the famous and often-recorded "Intimate Letters", as well as Pavel Haas' second string quartet. The quartet joins forces here with the 30 year old internationally renowned percussionist from Edinburg, Colin Currie, to present the version with percussion instruments.
Pavel Haas wrote the second string quartet, titled "From the Monkey Mountains", at the age of 26 as a reminiscence of his summer holiday in the Czech-Moravian Highlands, which went by this nickname in Brno at the time. The individual movements are more or less genre images. The programme nature of the work is fully consistent with Janáček. The substance and orientation of the music, however, are entirely Haas, underscored by the prescribed ad libitumuse of the jazz band.

The Pavel Haas Quartet has signed an exclusive recording contract with Supraphon.

“What is immediately striking about the present performance is its boldness and originality in terms of tempo contrasts, rhythmic emphasis and textural variety. Not only is the playing beyond reproach on technical grounds, but also, more importantly, it conveys with almost graphic immediacy the searing passion the composer felt for Kamila Stösslová.”
BBC Music Magazine, October 2006

“The Pavel Haas Quartet is yet another exceptional young ensemble from the Czech Republic, and this debut recording is a major statement… In short, this is yet another first-rate performance of this glorious work, one of the pinnacles of the quartet literature… A stupendous release!”
ClassicsToday.com, October 2006

“Haas's quartet gets a brilliant performance that combines lyricism with urbane wit. The Janacek is harrowing in its immediacy, if occasionally too hard-edged.”
The Guardian, October 2006

“This beautifully engineered disc offers a brilliant and intructive recording of Janáček's oft-recorded Second Quartet. The prizewinning Pavel Haas Quartet comprises four relative youngsters, but the precise calibre of their ensemble, their minute attentiveness to one another and the subtle way each member is given space by the others at key solo moments both here and in Haas's Second Quartet make this not just an intelligent, fresh reading, but also a beautifully crisp, clear one.”
The Strad, November 2006

“Yet these young players stamp their authority on the piece with a technical precision and a searing immediacy that’s rarely if ever been equalled…You’d be disappointed if the quartet that named itself after the composer couldn’t make it a special recording, and it has. Great performances, an imaginative programme, and a superb recording as well. This couldn’t be better.”
BBC Andrew McGregor, 18th December 2006

“The Pavel Haas Quartet's stre­amlined but full-blooded playing is more than welcome, and if they are lining up the first Janáček and the first and third Haas for a follow-up CD, I will be at the front of the queue to hear it.”
Gramophone, November 2006

“…compelling for its balance of technical mastery and raw emotion.”
Presto Classical, Katherine Cooper, May 2014

“The catalogue is not short of recommendable versions of Janácek's Inti­mateLetters Quartet. But there are any number of ways of bringing its hyper-passionate declarations off the page, and this young Czech quartet have plenty of ideas of their own about that. Once or twice that leads them into an overcalculated delivery. But try the third movement at 2'58" where, having fined the texture down to a whisper, Janácek gives the first violin an electrifying outburst: it's hard to imagine if that contrast has been made more emotionally real on record. But then there is the 1925 Second Quartet by the composer whose name the players have adopted. This is the kind of piece that may make you wonder why you haven't heard it before. After a first movement that tellingly redeploys a number of patent Janácekisms, Haas slips into the grotesque humour of Stravinsky's Thre­ePieces for String Quartet and once again fashions a structure that transcends reliance on its model. In the finale whackiness goes a step further, with a rollicking jazz-folk fusion, brilliantly caught here together with the original drum-kit accompaniment that Haas suppressed following adverse criticism at the premiere. The PHQ's streamlined but full-blooded playing is more than welcome, and if they are lining up the first Janácek and the first and third Haas for a followup CD, bravo! Superb recording quality too.”
The Gramophone Classical Music Guide 2010