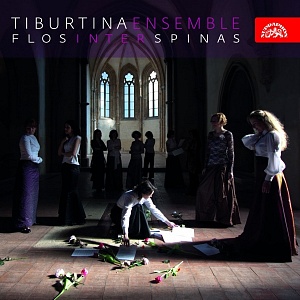 The Virgin Mary surrounded by Saint Catherine, Saint Dorothy, Saint Barbara and Saint Margaret. This frequent medieval representation bears witness to the great reverence paid to the Virgin Mary and her companions which strongly influenced the mysticism of the late Middle Ages. The repertoire of the recording recalls the thorny lives of these female martyrs and the veneration of them, as preserved in the 13th- and 14th-century manuscripts of the Benedictine Convent of St George at Prague Castle. The choral repertoire is supplemented by polyphonic Marian motets from the most significant polyphony manuscripts of this period. The Gothic harp accompanies the other solo parts in the motets too. Owing to their exceptional qualities, the Tiburtina Ensemble are regularly invitedto appear at prestigious international festivals. The members devote to knowledgeable interpretation of early music and have performed with renowned ensembles (Collegium 1704, Collegium Marianum, DoulceMemoire, Mala Punica, Collegium Vocale Gent, Bach Collegium Japan, etc.) as soloists. The CD "Blossoms Among the Thorns" reveals to the listener these hitherto concealed gems of Czech medieval music and spiritual traditions.

After centuries, Tiburtina's beautiful voices reveal to us the concealed magnificence of medieval Czech sacred music