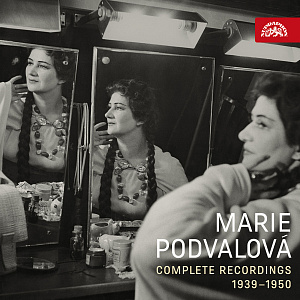 The album featuring the complete studio recordings made between 1939 and 1950 by the celebrated Czech soprano Marie Podvalová, a long-time soloist of Prague’s National Theatre Opera, has been reviewed by Rob Cowan in his monthly survey of historic reissues and archive recordings in the December issue of Gramophone magazine.

“Podvalová, as I remarked in my original review, offered ‘bold, fearless singing, almost always dead in tune like a knife in the heart’. I wasn’t aware at the time that some little while later Podvalová recorded the opera’s thrilling finale under Otakar Jeremiáš (originally on Ultraphon 78s), which is almost as electrifying as the Talich version, though the live recording has the edge, not least because of the tumultuous applause that breaks in before the end… Needless to say the younger the voice, the better it sounds, but Podvalová’s ar­tistry is always a given… The transfers are in general excellent.”