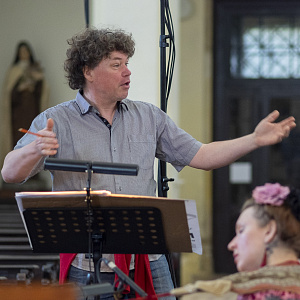 How would you describe Tůma’s development as an artist?

During Tůma’s tenure, the atmosphere in Vienna was comparable with that in other Baroque-era metropolises – Dresden, Venice, Paris, and others. The frequency of music performances, either in churches or at the imperial court, was truly impressive. Such a thriving milieu provided ideal conditions for the young Tůma, who, absorbing the influence of Fux and Caldara, as well as bringing to bear his previous experience in Prague, went on to create a singular style, which earned him general esteem. A crucial role in his artistic development was played by his serving at the imperial court, where he had available a professional vocal-instrumental ensemble, for which he could write music virtually at his own discretion. In this regard, I deem the 1750s to have been the golden era of Tůma’s life. His work at the monastery in Geras was undoubtedly affected by living in seclusion after abandoning the excitement of Vienna, yet he could also enjoy creative freedom and was afforded time to respond to the ascending musical styles. I believe that our albums will convince the listeners that Tůma was an exceptional composer who rounded off and cultivated the late-Baroque sacred style, and served as an inspiration for the great music creators of the incipient Viennese Classicism.

Recording church music entails tackling numerous questions. Where to place the singers and the instrumentalists? How to make a stereo recording in a real space, divided into the concerto group and the ripieni? How to determine the register of a piece that originally reckoned with the sound of a large organ? Sorting out such aspects involves trials and experiments, with the desired objective being to attain as perfect a sound as possible. I was delighted to find out that almost three centuries on Tůma’s music works a treat, overwhelming both the performers and the listeners with singular Baroque beauty and powerful energy.