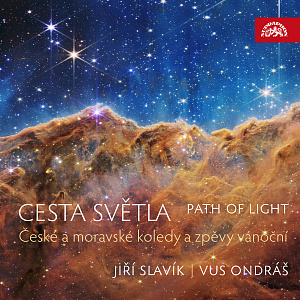 The Path of Light is an extraordinary project of composer and multi-instrumentalist Jiří Slavík with voices and instruments of the orchestra and female choir of Military Arts Ensemble ONDRÁŠ. Together they bring to life new colourful arrangements of various Christmas stories found in typical Czech and Moravian carols. The album Path of Light will be released by Supraphon on CD and in digital formats on Friday 25th November 2022.

The repertoire containing some of the most famous Czech and Moravian carols received in Slavík’s arrangements a form of a folkloric symphony, which is complemented by choral polyphonies and vocal solos. The fundamental idea behind his approach was to take the dramatic unfoldings found in the lyrics of the different songs and set that to music. These pieces thus progressively describe the birth of Jesus Christ, as well as the typical Christmas carolling, during which the world comes to a pause, so that people can spend time together.

When the world was hit by the Covid pandemic in the spring of 2020, these carols sounded in the head of Jiří Slavík, an experienced jazz musician with roots in traditional music. “The composition happened in a period, when every person’s mental health underwent a difficult test. Nobody knew back then, when it will again be possible to meet up, play and sing together“, remembers Jiří Slavík. “From those dark days, it was necessary to find an exit path – a path, which will have light at its end.“

From the very beginning, it was clear that this music would be interpreted by MAE ONDRÁŠ – musicians and singers coming from traditional music, who are also able to cross boundaries between different genres. „ONDRÁŠ is the only professional group of its kind in the Czech Republic, that is able to interpret fully composed and complexly arranged music, which also contains a strong element of traditional stylishness, phrasing and expression“, adds Jiří Slavík.

Interesting aspect of the Path of Light’s design is the cover photo, which shows birth of new stars in the Carina Nebula, as captured by the new James Webb telescope, NASA.

A concert adaptation of the Path of Light will be filmed by the Czech Television in November and broadcasted in advent time. There will also take place various public performances during December in the Czech Republic.